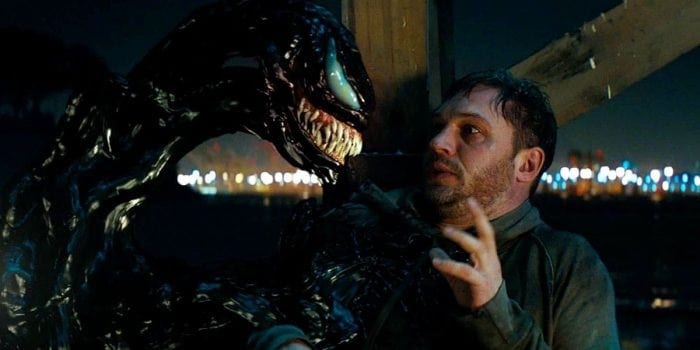 In Venom, Sony’s latest Marvel offering, director Ruben Fleischer and his writing team seem to have completely failed to grasp the fact that the world has moved on from the old superhero tropes of two-dimensional characters and half-baked ideas that relied too often on a lazy premise and even lazier dialogue. This shift in attitude could be attributed to a number of things, but if we’re going to be completely honest, most of it falls back on the way Disney have handled their Marvel Cinematic Universe, allowing them to capture the hearts and minds of fans by creating a world in which there’s scope for both gravitas and humour.

Stepping into the role of Eddie Brock AKA Venom, Tom Hardy does his best with a script which sin’t quite sure how it wants to play the whole thing. The story itself is fairly innocuous, Hardy’s Eddie Brock, a San Fransisco TV reporter, sees his life crumble before him after attempting to expose powerful megalomaniac billionaire scientist Carlton Drake (Riz Ahmed). Fired from his job and deserted by his fiancé Anne (Michelle Williams) for breaking her trust, Eddie soon finds himself ostracised by the whole city. Six months later, Eddie is approached by one of Drake’s scientists who disagrees with her boss’s methods and wants to help Brock expose him. With her help, Eddie finds a way into Drake’s laboratories and in the process is infected by a symbiote, giving him superhuman strength.

While one could easily forgive the slightly disjoined and rather flimsy plot, what is truly unforgivable here, is the fact that no effort seems to have been spent developing any of the characters, choosing instead to latch on to tired old cliches and a dialogue which could have been written by a 12 year old. For his part, Tom Hardy is faultless as Eddie Brock, he is unpolished and deeply believable, even if in the end he finds himself having to utter some of the silliest lines in history.

On the whole, Venom just doesn’t quite cut it as a Marvel story, it’s clunky, ham-fistedly cringeworthy and above all, just hideously tiresome. And even if you’re prepared to ignore the terrible CGI, which to me looks almost like something from the late 90s, the story itself just doesn’t work nor is it conducive to any kind of excitement for what else is likely to come after it. A muddled, awfully written and shabbily handled production which should never have seen the light of day.