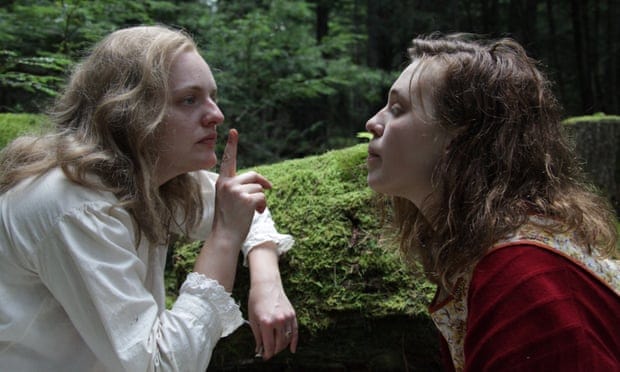 If you are hoping to learn about the life and process of iconic horror writer Shirley Jackson then Shirley, Josephine Decker’s latest feature, is not for you. If, however, you’re keen for an exhilarating and sometimes mystifying journey into the gender politics of the 1960’s, with a dash of distorted escapism, and only the smallest sliver of historical accuracy, then this film might just do it for you. Following on from her disorientating, yet mesmerising 2018 film Madeline’s Madeline, Decker continues to push the boundaries of conventional filmmaking with her new semi-biopic, Shirley.

The fictionalised Shirley Jackson is played here by Elisabeth Moss, with her narcissistic university professor husband Stanley Hyman, portrayed by Michael Stuhlbarg. Stanley’s eye for young women (mostly his students) and Jackson’s fits of depression is causing a rift between them, until Hyman decides to ask a younger couple to come and live with them. Rose (Odessa Young) and Fred (Logan Lerman) are at first a sickly sweet distraction – young and in love – though it soon becomes clear that there is more than simple hospitality at play here. Perhaps for Hyman it is the want of a pretty young thing at the dinner table, but for Jackson, the psychological warfare between the four adults re-ignites her creative practice.

Moss as Jackson is enchanting. A veteran of character acting, Moss is known for disappearing within her roles, but she is almost unrecognisable as the often tortured Shirley Jackson – a woman cornered by society and her place within it, driven almost to madness by her own genius (and her philandering husband) There has been criticism of Decker and Moss’ portrayal of Jackson (including from Jackson’s own son – the film chose to make Jackson childless), but it feels as if Decker is intentionally characterising the film’s Shirley as a hyperreal, invented version. Quite deliberately, Decker does not have Jackson discuss exactly what she is writing, nor make any mention of Jackson’s works within the film. It feels very purposeful that the enigmatic Shirley Jackson is more of an inspiration for the film rather than trying to be an accurate portrayal of her life.

Odessa Young as the impressionable Rose is also excellent and matches Moss at every beat. The best moments in the film come when the two are onscreen together, and the penultimate sequence is nothing short of magical. In their own ways, both women are fighting against an invisible set of rules and guidelines, seemingly systematically designed to take away all of their creativity, independence and autonomy. As Shirley says to Rose, ‘the world is too cruel to girls.’ Similarly, Jackson’s writing and research within the film focus on the case of a missing student, a young woman. Whilst Shirley’s plot may be murky at times, the freedom and oppression of Rose, Jackson and the missing student feel intrinsically tied up with each other. Will they discover what happened to her? Is this entire fiasco constructed a means for Jackson to finish her book? The ending does not give us many clues, but the open ended mystery fits with the whimsical nature of Decker’s film perfectly

Shirley succeeds because Decker does not tie herself to the facts of Shirley Jackson’s life, instead invoking dramatic license as and where she feels it fits best. This film does not follow the usual narrative beats of a biopic, and is far better for it. This approach works because, instead of focusing on being married to truth, Decker is married instead to creating an engaging narrative that swirls around the iconic writer, pulling us into her world. It’s a world that feels partly as if Jackson herself had imagined – it up a seedy undercurrent of exploitation and menace coupled with a saccharine sweetness of civil middle-class American life. Decker’s Shirley encapsulates Jackson’s own imagination in it’s style and substance, and is equal parts mad and wonderful for it.