The Peterloo Massacre may be a strangely overlooked event within British history, but there is something undeniably timely about the episode and Mike Leigh’s adaptation of it. Peterloo charts the period between the Battle of Waterloo and the Peterloo Massacre that took place in Manchester four years later. On 16th August 1819, an estimated 60,000 people gathered in St Peter’s Field, Manchester to demand parliamentary reform and […] 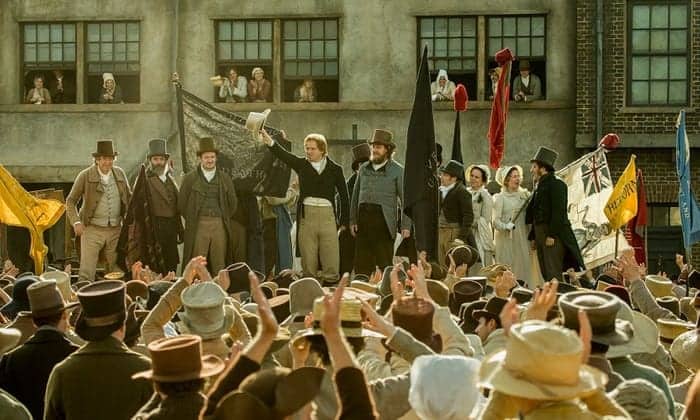 The Peterloo Massacre may be a strangely overlooked event within British history, but there is something undeniably timely about the episode and Mike Leigh’s adaptation of it. Peterloo charts the period between the Battle of Waterloo and the Peterloo Massacre that took place in Manchester four years later. On 16th August 1819, an estimated 60,000 people gathered in St Peter’s Field, Manchester to demand parliamentary reform and the representation of them and their city. The authorities and local magistrates misjudged the peaceful rally and sent the yeomanry and cavalry to disband the crowds. The subsequent violence resulted in 15 people being killed and a further 400 being injured.

Instead of focusing on a single character, the film flitters between different figures who in a variety of ways were involved in the gathering. Some make speeches; others attended the demonstration; while some were responsible for the violence and loss of life observed.

Mike Leigh is one of my favourite filmmakers and I have loved many of his films, especially Naked, Secrets & Lies, and Another Year which are among my all-time favourites. Over the course of his career Leigh has built a formidable reputation and I’d go as far as saying that only Alfred Hitchcock has had a greater impact on British cinema. In the nearly 40 years since his debut feature Bleak Moments, Leigh has amassed a body of work comparable to the great Japanese director Yasujirō Ozu. Like Ozu, Leigh often focuses on intimate stories that look at relatable and everyday struggles. His reputation as a social realist director is a bit unfair as it overlooks the more poetic and personal characteristics of his work. He tends to have more in common with Jean Renoir and SatyajitRay than the British New Wave filmmakers of the 1960s.

Peterloo represents his most ambitious and grand film to date. The Peterloo Massacre is clearly an event close to Leigh’s heart and there is no absence of period detail. It is hard to talk about Peterloo without describing the historical events that preceded and followed the demonstration. The film itself has the same predicament and much of the plot is occupied by dialogue and speecheswhich contextualise actions and the desire for change.

It is understandable that notions such a habeas corpus need to be explained as the film is clearly being marketed at a global audience but it can be slightly frustrating when simple concepts like inflation are described. By focusing on historical detail over personal experience large portions of the film end up feeling a bit like a history textbook. Dunkirk showed us last year that historical context is not necessarily required when presenting history on an epic scale.

Peterloo has over 100 speaking roles and no particular focus is given to any of them. No one character gets too much screen time and it results in each one of them feeling like an acquaintance. Despite the loss of life and hardship, the film is oddly unaffecting and emotionally underwhelming. For all its grandeur and good intentions much of Peterloo is merely intriguing.

Despite its stagey presentation and a few too many speeches, Peterloo touches on a number of important and precedent issues. The 1819 demonstration aimed to bring attention to Manchester’s lack of political representation, unemployment, inequality, and the misuse of government funds. These are all concerns which remain relevant and could have made Peterloo particularly timely.Instead something is lost and Leigh’s clear passion for the event and the history that surrounds it never quite comes across.