Netflix is famously tight-lipped about the viewership data for their Original releases, and in the case of Mute this might be for the best. For one wonders why anybody would, after the first five minutes, want to sit through the remaining two hours. Duncan Jones, whose minimalist, lo-fi science fiction delight, Moon, saw him thrust […] 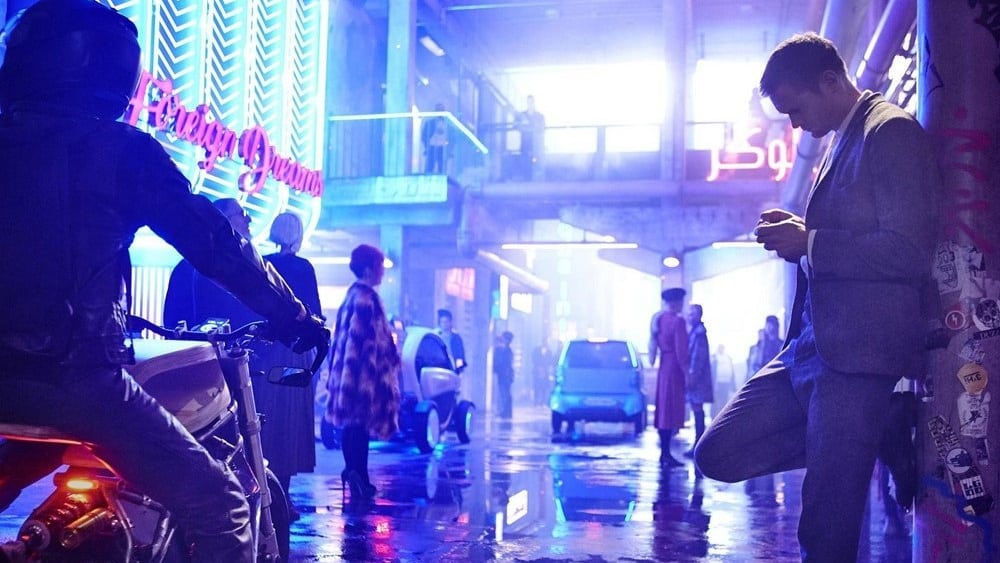 Netflix is famously tight-lipped about the viewership data for their Original releases, and in the case of Mute this might be for the best. For one wonders why anybody would, after the first five minutes, want to sit through the remaining two hours.

Duncan Jones, whose minimalist, lo-fi science fiction delight, Moon, saw him thrust into the burgeoning pool of promising directors, was followed by an equally confident display of filmmaking prowess in the form of Source Code. Jones’ third feature, Warcraft, a critical and box office disaster, saw fingers crossed the world over that it was to be a minor hiccough in the otherwise continual upward trajectory of his directorial career. So, with the release of Mute, eyes have turned to the big N on the small screen in the hopes of seeing a return to form. Unfortunately, you’ll have to keep waiting.

Leo (Alexander Skarsgård) is an Amish mute, less the result of the motorboat propeller accident that shredded his neck and more his strict parents’ reluctance to have it surgically sorted, living and working in the neon shimmer of Berlin, circa the mid-21st century. He has taken up with the blue-haired Naadirah (Seyneb Saleh), a cocktail waitress whose complicated past is conveyed through heavy-handed dialogue and the admission that she has a secret. Naturally, Naadirah soon goes missing and Leo, the silent giant, embarks on a mission into Berlin’s seedy underworld to find her.

Running parallel to this story is that of the wild-eyed, moustachioed, Cactus Bill (Paul Rudd) and his mate, Duck (Justin Theroux), both former US Army medics working as stitch and fix surgeons for club owner and mobster, Maksim (Gilbert Owuor). Bill is working, after having gone AWOL, as payment for documents and safe passage out of the city and military life for himself and his young daughter.

Duncan Jones has transplanted run of the mill mystery fare into a science fiction world and peppered the plot and characters with contrivances that bring with them a slew of unrewarding, unanswered questions. Skarsgård struggles with a one-note character, reducing a performance to a series of recycled wide-eyed looks of desperation, fear & determination, and who’s defining traits ultimately provide no depth. The Amish element invites an opportunity for something to be said about the nature of technology, but instead all we see is Leo struggling to use a voice-activated food delivery system.

Most problematic is the relationship between Cactus Bill and Duck. Their bond, supposedly forged by their shared experiences serving as medics in Afghanistan, is defined by an insufferable back and forth of faux homoerotic banter, all “babe” and “honey.” And, in a surprisingly grotesque revelation of Duck’s predatory predilection for children, it’s baffling trying to unpack the reasons as to why Bill, with a child of his own, has maintained this relationship or even the reasons behind this seemingly unnecessary character development.

Disappointingly, Mute’s futuristic cityscape, modelled on the likes of Blade Runner and The Fifth Element, also comes up short. It is devoid of any real semblance of character, and more concerned with the neon glow of bubble gum science fiction flourishes than it is creating a world that contributes to the film’s atmosphere.

However, despite Mute’s many failings, something needs to be said about Netflix’s role in the provision of alternative avenues for creation and distribution of original content. Granted, their most recent Original releases have left a lot to be desired. When We First Met, which attempted to blend the central conceits of Groundhog Day and Big with frustratingly bland results, and the disappointing third instalment to the Cloververse, The Cloverfield Paradox, may unfairly colour the streaming behemoth as an unforgiving factory of fun, flooding the market with poorly conceived and produced films in its endless pursuit of subscription fees.

Cast your minds back, though, to even just as early as 2017 and you can find shining examples of when Netflix has hit right in Mudbound, I Don’t Feel at Home in This World Anymore and Okja. All films that in the current, traditional landscape of moviemaking would never have been green-lit, but which, through Netflix, have provided their filmmakers with total creative control and worldwide exhibition. With that, Mute represents another avenue of opportunity for films and filmmakers, and an interesting step towards meeting the new conditions developing in the world of film.