By Michael McNulty Mudbound, directed by Dee Rees and based on the novel of the same name by Hillary Jordan, is a mud-caked American epic.  Set in the Mississippi delta it tracks the tangled lives of two families over six years.  It is both lyrical and poignant, an expertly crafted microcosm of America that is […]

Mudbound, directed by Dee Rees and based on the novel of the same name by Hillary Jordan, is a mud-caked American epic.  Set in the Mississippi delta it tracks the tangled lives of two families over six years.  It is both lyrical and poignant, an expertly crafted microcosm of America that is troublingly relevant.

A 31 year old virgin, Laura (Carey Mulligan), is whisked away by Henry McAllan (Jason Clarke), a man less romantic than he is sturdy, but who brings the promise of a life beyond the walls of Laura’s home.  Henry buys acreage in the rain drenched, muddy Mississippi delta and the newly formed family pick-up sticks and move to live on the land with Step-Father in tow, whilst Henry’s younger brother, Jamie (Garrett Hedlund), ships off to pilot B-25s in the war.

Long-time residents at a property down the road, the Jackson family, tenant farmers and black-Americans, are linked to the McAllan clan through the land they share and their son, Ronsel (Jason Mitchell), who too is fighting overseas in the 761st Tank Battalion.  When head of the Jackson family, Hap (Rob Morgan), injures himself the two families’ lives becomes intertwined.

There is a lyrical potency to Mudbound; the narrative is intricately woven together, seamlessly moving from character to character like an Olympic relay baton.  We travel with the six core characters that make up this ensemble cast and are provided intimate insights into their experiences through their internal monologues.

Dee Rees has an eye for moments filled with such quiet, powerful emotion, captured beautifully by cinematographer, Rachel Morrison, who evokes, in the dark browns of the delta mud bathed in the deep oranges and purples of the fading light, a quality that recalls Terrence Malick.  Entire stories are told in fleeting moments, Hap’s sense of heritage to the land he works, Laura’s sense of self-worth in the eyes of suitors and the shared love of a mother and son in a chocolate bar.  They are moments that are grounded in the soft heart of hard reality, as tender and beautiful as they are raw and true.  The result is a film that floats through the natural rhythms of life exploring the complexity of these characters and their relationships.

There is not a bad turn in the house, the characters are played excellently, but it is Mary J Blige and Carey Mulligan who stand out.  They are transformed in their roles of Florence and Laura, respectively.  Mulligan’s plain Jane Laura, for whom a life of domestic servitude she accepts wholly, is lost behind the slowly hardened features of a woman thrown into a world beyond her civilized sensibilities.  Mary J Blige as Florence Jackson is unrecognizable; she is a loving Mother and wife, tough and tender.  Her performance manages a near perfect balance of muscularity and delicacy that carries with it the kind of quiet power that is felt as much as it is heard.

The meat of Mudbound exists in the friendship born between Jamie and Ronsel upon their return from the war.  Both have brought with them traumas that fester in the mind and push Jamie to drink and instil an impatient in Ronsel.  The two find quiet sanctuary in the privacy of Hap’s half-finished church and therapy meets confessional as emotion creeps out of two men who have experienced the worst of what the world has to offer and more.  For Ronsel, the war, for all its horrors, marked a moment of strange liberation, where skin colour fell by the wayside and he was, as he states proudly in one scene, “a liberator,” and not just another “nigga pushin’ a plough.” 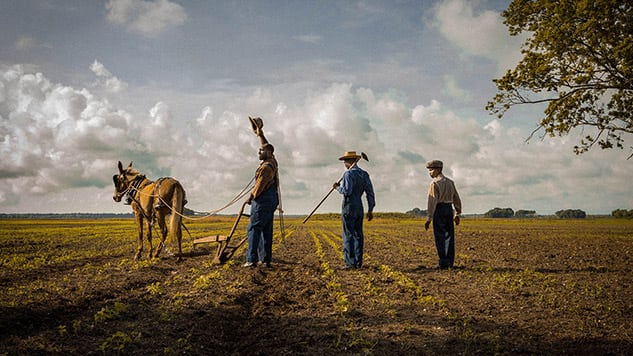 It is their relationship that is the catalyse for the film, causing a stir and in none more so than Jamie’s father, Pappy (Jonathan Banks).  His bigotry and hatefulness is insidious, weaving itself like a sickness into the fabric of the families’ everyday lives, rearing its ugly head and spouting its vicious bile.  It’s a frightening reminder of institutional racism that is ever present, slowly simmering below and that in the context of this film is not a practice of out-dated and violent racism, but part and parcel of daily life.

As Henry and Jamie dig the grave that bookends the film, they turn up slave shackles buried deep within the Mississippi mud.  They have uncovered a slave grave of which the skeleton and irons of shot runaways remain.  In this Dee Rees captures a moving and poignant image that sings the history of a nation made rich by slavery and poisoned by it, a history that lies buried beneath the shared land of a divided people.  There is an urgency and relevance in Mudbound that demands a change in attitude that calls for a collective spirit and a coming together in a time when people are growing increasingly further apart.

Mudbound will be available on Netflix and have a limited theatrical release from November 17th, 2017