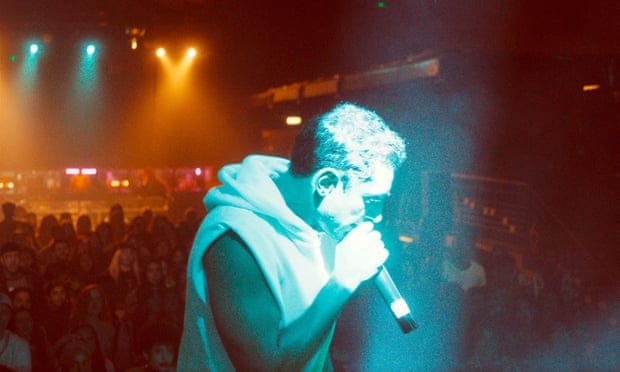 Ambition, identity and deep seated generational trauma circle around Riz Ahmed in Bassam Tariq’s debut feature ‘Mogul Mowgli’ – the story of a young British Pakistani rapper who is struck down by a debilitating illness on the eve of his big break in the music industry.

Riz Ahmed stars as rapper Zed, or Zaheer as he is known to his family – just one source of contention between Zed’s lived experience as someone straddling two distinct identities. Mogul Mowgli’s intense opening sequence showcases Zed’s exciting talent, and he’s quickly revealed to be on the career track of his dreams, something he has been striving after for a long time. Just as he’s about to embark on a tour that could break him into the industry properly, he is struck by a debilitating illness that leaves him unable to continue with the life he has dreamt of for so long.

Ahmed has proven his talent time and time again – both as an actor and as a musician/rapper (he’s part of the Swet Shop Boys, an Indian/Pakistani rap group). His portrayal of Zed as a talented and energetic rapper on-stage to the lowest moments of his life (unable even to go the bathroom by himself) is utterly compelling, and this is in no small way due to Ahmed himself. Onscreen Ahmed hunkers down into this character, and as a result Zed feels authentic – more so than the usual two-dimensional representations of British-Pakastani Muslims, because Bassam digs deep into the paradoxes of traditions and culture rubbing against Zed’s drive to succeed in a more ‘Western’ career as a rapper. Ahmed’s Zed, coupled with Bassam’s dedication to a kind of surrealism involving characters and hallucinations within the film allow us an audience to explore this journey of discovery with Zed. He’s learning about his family, their past and their trauma, just as we are.

The theme of intergenerational trauma is strong in Mogul Mowgli, and as Zed reconciles with his family, he becomes more understanding of it. Though much of the film takes place in one or two locations – the hospital that Zed is confined to, and later his family home – his personal journey is expansive. He is constantly caught in a crossfire of who is expected to be vs who he wants to be. The physical illness that leaves him dependent on others feels as if it is a metaphor for this identity crisis – Zed is physically and mentally trapped. He may be born in London but his brown skin and his religion make him an outsider still, even to other minorities – as evidenced in a rap battle halfway through the film. Zed’s music and lyrics are cutting, witty and provide the injection of humour that keeps Mogul Mowgli from becoming a tragedy, yet always reminding us what is at stake for Zed.

A stunning debut feature, and surely a talent to watch, Bassam Tariq has proved his keen eye for storytelling in this truly unique character study. Poignant, proud (and also laugh out loud funny in some very key moments), Tariq strikes a hard balance and gets this film exactly right.