RelatedPosts Film Review: Cuties Film Review: Tenet Film Review: Koko-Di Koko-Da Why you must know the achievements of Black Panther star Chadwick Boseman After decades spent in mostly supporting roles, legendry American actor Harry Dean Stanton reminds us of his talents in the low-key but thoughtful Lucky. 30 years on from Paris, Texas, which propelled Stanton to […] 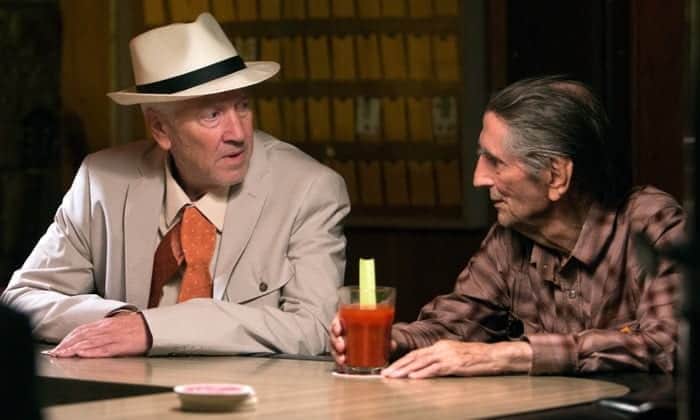 After decades spent in mostly supporting roles, legendry American actor Harry Dean Stanton reminds us of his talents in the low-key but thoughtful Lucky. 30 years on from Paris, Texas, which propelled Stanton to fame, he once again finds himself in the American desert in his final screen role before his death almost exactly a year ago.

Known simply by his old nickname Lucky, Stanton plays an elder man at ease with life and comfortable with his daily routine. Each day he performs his exercises in his living room, before travelling to the small town’s only dinner and visiting a convenience store. He walks round the town with purpose and seemingly lives off a diet of milk, coffee, bloody Marys, and copious amounts of cigarettes. David Lynch makes a surprise appearance as Howard, a not quite as elder man whose hundred year old turtle has run away. He jokes that the turtle has outlived two of his wives and plans to give him everything he owns when he dies.

One day Lucky faints while making coffee and wakes in the doctor’s office. After a quick examination Dr. Kneedler says that there is nothing particularly wrong with him and that he is just old. This diagnosis, coupled with the suggestion that he should receive help from an assisted living carer, leaves Lucky pondering what there is left to live for.

Lucky is ultimately about facing up to death and seeing it for what it is. The word ‘realistic’ appears in Lucky’s daily crossword and overshadows his change in mood and perspective. The town’s other inhabitants, who are eccentric but not to the same degree as the film’s title character, are there for Lucky even when his behaviour can be hard to fathom. However old you are there is joy to be found in other people and sadness to be found in loneliness.

It is a central message that we can all relate to and I only wish that it was delivered with greater emotional resonance. The film may have the same pacing and focus on everyday activities as Jim Jarmusch’s Paterson, but it lacks a pulse and often feels a little sleepy. By contrast, Paterson was brought to life by Adam Driver’s performance, its gentle humour, and the inclusion of poetry. Lucky’smessage is a little too easy to ignore within a story that can feel a bit dull. There is a lot to like within the film but overall I didn’t enjoy it as much as I would have liked.

The direction from John Carroll Lynch, who has been a success character actor and mainstay of American independent film for more than 25 years, is serviceable but lacks any flourishes and is too reliant on Stanton’s central performance. On screen he is a very recognisable figure, who is well known from his roles in Fargo, Zodiac, Gran Torino, Shutter Island, and The Founder, but behind the camera it is hard to distinguish his work from the many indie dramas that find their way to the Sundance film festival each year. In the end, Lucky has a lovely message but not the delivery to back it up.