Lady Bird is a film that deals with the trials and tribulations of first love, losing your virginity, and the final year of high school in a way that is rarely seen on the big screen. Each section of the film is given its own space to breathe, and although the film sticks to its […]

Lady Bird is a film that deals with the trials and tribulations of first love, losing your virginity, and the final year of high school in a way that is rarely seen on the big screen. Each section of the film is given its own space to breathe, and although the film sticks to its tight 93 minute running time, no scene feels rushed. The film in fact should be commended for leaving you wanting more, for making you want to stay with the characters a little longer, to hear how the next part of the conversation went or witness the silent drive home.

It’s set in Sacramento in 2002, with the narrative focusing on Christine “Lady Bird” McPherson (Saoirse Ronan) as she navigates her final year of high school in a private Catholic school, the strain of which takes its toll on the family financially. The topic of money is a fracture point throughout the film and, although she claims differently, Lady Bird is exactly like her deeply opinionated and strong-willed mother, Marion (Laurie Metcalf). Watching mother and daughter argue and bicker as a sometimes accidental form of conversation will bring back memories for most audiences of when they were wide-eyed 18-year olds, with big plans and even bigger dreams that often had to be brought down a peg or two.

Lady Bird is Greta Gerwig’s first feature film where she is credited as Writer-Director and although Gerwig co-wrote the scripts for both of Noah Baumbach’s Frances Ha and Mistress America, Lady Bird truly does feel like Gerwig’s announcement to the world, creating a film instilled with delicate emotion, big belly laughs, and just the right amount of nostalgia. The film is semi-autobiographical, and all the stronger for it, as it means the film’s footing is much more secure and in turn allows Gerwig to assuredly showcase her considerable directing and writing abilities.

Christine McPherson wants to be called “Lady Bird”, and considers to be her given name; “I gave it to myself, it was given to me, by me,” she explains. She wants to star in school plays, but keeps getting lumbered with what she considers to be lowly roles – one highlight being when Lady Bird is offered the role of ‘The Tempest’, and her best friend Julie (Beanie Feldstein, hilarious) tries to placate her by saying, “it’s the titular role!” To which Lady Bird snaps back, “No, it’s a made up thing so we all can participate.”

Lady Bird wants to attend a university like Yale, but probably not Yale as she doesn’t have the grades and her passions keep jarring with her world-weary mother. The film makes it clear that Lady Bird feels everything intensely, shown predominantly through the wonderful performance of Saoirse Ronan, who is able to accentuate that delicate stage of being a teenager who wants to spread their metaphorical wings, and at the same time cling on to the comforts of home.

In the opening scene, towards the end of a road trip to various colleges, Lady Bird and her mother are listening to the closing part of ‘The Grapes of Wrath’, and both of them are crying. When the tape ends, Marion wants to sit and enjoy the moment and reflect on what they’ve been listening to, but Lady Bird lets out an apt and semi-disgusted, “Are you serious?” The bickering that follows is both hilarious and awkward.

Metcalf’s performance is a tour-de-force of precision and talent. She’s able to show every side of her character over the course of the film, with her performance not faltering in any instance. The Oscar for Best Supporting Actress may elude her with Allison Janney being the bookmakers favourite, but personally I have not seen a finer supporting performance all year.

Setting the narrative in the early noughties allows the film to be faithful to the clothing, music and the attitudes of the time and of also living in that precarious post-9/11 moment when the world felt turned upside down. Gerwig offers a precise depiction of the McPherson’s class anxieties, which fly in the face of Lady Bird’s plans and dreams of attending a far-away, expensive college; leading to Metcalf uttering the line, “Maybe my job is to keep you realistic”, to which Lady Bird replies, “Seems like that’s everyone’s job.” The anxieties of their struggle are no more evident than in Lady Bird’s loving, passive father Larry (Tracy Letts, quiet but excellent) whose recent redundancy is all the more heart wrenching for how mundane his struggle is. 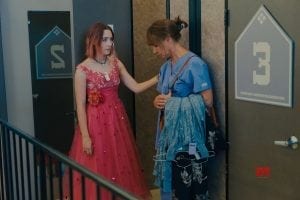 Watching Lady Bird, I was reminded of the song ‘Ribs’ by Lorde and specifically the lyrics:

Although the song is supposedly about a lover/friendship, it reminded me of how Lady Bird sees the world she’s grown up in and the places she has inhabited in her 18 years. Everyone reaches a point in their lives where they can’t stay in the same place any longer, they have to venture from the nest in some form, to walk on their own two feet and see how far they can go. Lady Bird wants it all and then some: “But that will never be enough”. As Lady Bird makes her first steps towards adulthood and seeing the world through grown up eyes, the stark realisation of who she is (at that point in her life), what she needs to do, and what she’s had becomes all too clear and she momentarily clings to the comfort she has so often dismissed.

The closing scenes in Lady Bird borrow from the canon of ‘coming of age’ films, but imbue them with such heart that they are given a depth such scenes often lack. The mirroring of the final journey Lady Bird and her mother make gives the film a sense of place, compounding the loss of childhood so keenly that I was sideswiped as a lump formed in my throat. Lady Bird is the finest film about growing up I have seen, and firmly establishes Gerwig as a formidable talent behind the camera.

I am 26 year old freelance audio visual creative and writer. My writing includes film criticism and sports writing. I am also a Media Studies teacher and have been teaching at an inner-city London school for the last four years.