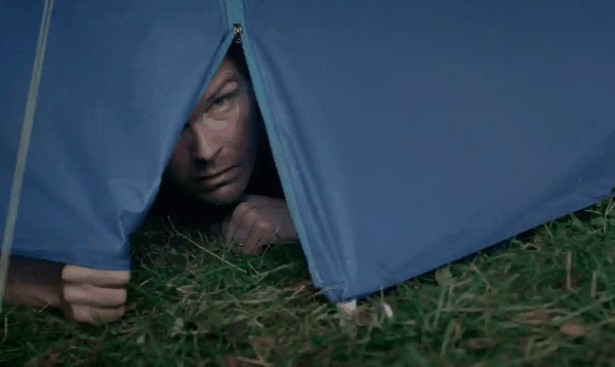 There is an ominous sensation right from the get-go in Koko-Di Koko-Da; humorous tragedy underscored by the sinister and disturbed. A bereaved couple Elin (Ylva Gallon) and Tobias (Leif Edlund) find themselves in a surrealist loop of horror, as a camping trip turns into a repetitive nightmare at the hands of folklore psycho-killers. The second offering by director Johannes Nyholm, following in the same vein of his debut The Giant, both showcasing his mythically peculiar storytelling.

Elin and Tobias are celebrating their daughter’s Maja (Katarina Jakobson) birthday on holiday in Denmark. First scenes have Maja in front of a window display mesmerised by a vintage music box decorated by a series of imaginary cartoon characters. At the restaurant later, Elin has an allergic reaction to shellfish in need of hospital treatment. Elin’s escalating severe symptoms are met with comedy and a touch of aloofness perhaps in keeping with family’s lackadaisical mood of being on vacation, which makes for an abrupt shift in tone when the couple wake up the following morning to a be greeted by the most tragic turn of events.

Fast forward three years, Elin and Tobias decide to take a camping trip in a bid to rescue their now fraught and bitter relationship. At this juncture the plot completely changes gear, as Elin wakes up in the middle of the night, only to be accosted, mulled and killed by three peculiar figures, one of which is holding a dead dog. The three exact characters found on Maja’s music box.

Time keeps resetting itself back to this exact point and their lives mutates into this unending loop of horror, each attack more intense than the one before. More so, as Tobias starts to resist, he has an inclining of what has befallen on them and makes attempts to subvert the course of events. Initially it appears as if he is trying to save only himself, but then slowly extends his futile efforts to save Elin. And on goes the cycle.

It’s a well-executed psychological horror that never loses steam despite the repetition in scenes. Nyholm’s emphasis on editing as well as making each repetition distinctive from the previous, avoiding any monotony. There is also a clever knack of cutting scenes mid-climax, instilling a sense of relief to the viewer but then the dread kicks in straightaway at the unavoidable prospect of starting all over.

There is a juxtaposition with these imaginary caricatures and the hyperrealist setting they are placed in. Thus, there is never the sensation we are watching something otherworldly; it all looks very real and hence the couple’s terror is truly relatable. The menacing feeling of horror is prevalent, more in the sense that this couple is completely helpless at the hands of these tyrants. But, also at the hands of a higher malevolent force, for whatever reason has placed them in this inescapable ultra-disturbing Groundhog Day scenario.

It all could be seen as a manifestation of the internal psyche of this guilt-ridden couple. Both of them stuck in this rut of depression and resentment unable to break free, with these foreboding tormentors behaving as symbols of their suffocating guilt, and it’s all coming to a head.

Koko-Di KoKo-Da is not an easy watch by any means, but it is fine addition to the absurdist Scandi horror genre, a truly fascinating allegory of grief. 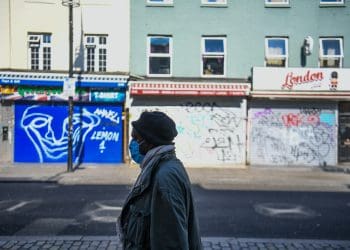