In Have a Nice Day, Liu Jian has created a world of multiple dimensions in the 2D renderings of a seedy southern China fringe town where lives intersect over a bag of cold hard cash. A suitable alternative title for this pulpy, crime-caper animation would be, “In the Mood for Money.” The story is simple, […]

In Have a Nice Day, Liu Jian has created a world of multiple dimensions in the 2D renderings of a seedy southern China fringe town where lives intersect over a bag of cold hard cash. A suitable alternative title for this pulpy, crime-caper animation would be, “In the Mood for Money.”

The story is simple, and the comparisons rife. When Xiao Zhang (Zhu Changlong), a low rent gangster existing on the bottom rung of the criminal ladder, robs underworld kingpin, Uncle Liu (Yang Siming), of million Yuan (approximately £ 100,000) to cover the costs to repair his girlfriend’s botched plastic surgery, the mob boss hires moonlighting hitman, Skinny (Ma Xiaofeng), to hunt Zhang down and retrieve the loot.

Have a Nice Day hurtles along in the form of a near still-life, with urban landscape illustrations drawn with such detail they bring the deliciously dark dereliction of a city to life. Fried telephone wires hang tangled above the peeling walls of sweaty back alleys, where dumplings steam out front of grotty, empty restaurants, and the quiet hum of flickering neon lights mixes with the low, continuous chirps of cicadas.

Tarantino and the Coen Brothers are quick to come to mind in the film’s elliptical structure, the way in which the characters are drawn, the absurdity in which events unfold, plot threads come together and in the almighty crescendo of the films finale. But, Have a Nice Day has all the atmosphere of a Wong Kar Wai film set against the uncertainty of a world consumed by Brexit Britain and the Trump administration. 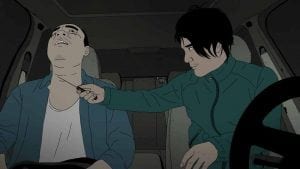 Jian’s background in painting, having studied it at Nanjing University and his involvement in the Gaudy art movement, which combined the bright aesthetics of folk art and consumer culture to criticize the proliferation of Western consumerism in China, have both clearly influenced the film’s look. This is best exemplified in a stunning, satirical sequence, played out in the form of a karaoke video, which pairs folksy communist propaganda imagery with song lyrics that expel the (exaggerated) wonders of a vacation stay in the Chinese city of Shangri-La, the name of which evokes James Hilton’s fictional, mythical valley in the Kunlun Mountains and the popular global, luxury hotel-resort chain.

As the plot unfolds, the malignant allure of an unclaimed bag of cash brings to light a city buckling under the weight of a quiet frustration and the petty self-interest of a disenfranchised population, misguided by the corrupting power of money, consumerism and materialism. Peppered throughout the film are references to Steve Jobs, Mark Zuckerberg, start-ups, stunted aspirations and ambition limited to the immediate, material pleasures of wealth. As one character puts it, “freedom is divided into three levels” dictated by the ability to buy whatever, without consequence.

Complementing the film with the undulating pulse of its genre blending mix of Chinese jazz, hip-hop and synth-pop is The Shanghai Restoration Project’s stellar score, adding a fresh layer of pop-cool to a gritty world where cash is king.