RelatedPosts Film Review: Monsoon Film Review: Cuties Film Review: Tenet Film Review: Koko-Di Koko-Da In Christopher Robin, director Marc Forster presents a nostalgia-laden adaptation of A.A Milne’s cherished children’s classic, in a film that is as heartwarming in its intent, as it is a little lacklustre in its delivery. Starring Ewan McGregor as the titular […] 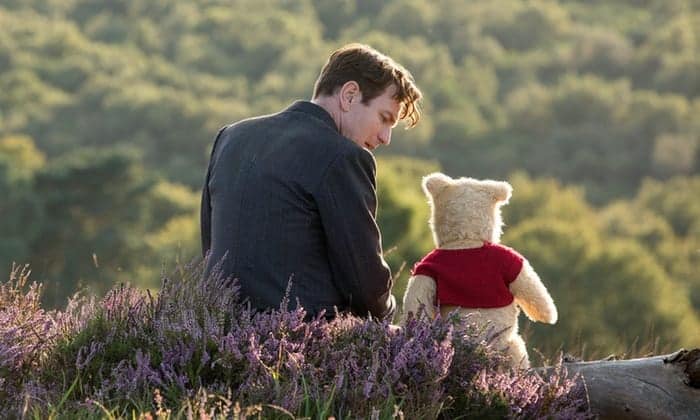 In Christopher Robin, director Marc Forster presents a nostalgia-laden adaptation of A.A Milne’s cherished children’s classic, in a film that is as heartwarming in its intent, as it is a little lacklustre in its delivery. Starring Ewan McGregor as the titular character, the film introduces a clever twist on the original story by offering Christopher as an adult in the midsts of a depressive midlife crisis, attempting to reconnect with his beloved Hundred Acre Wood, where along with his friends Pooh, Eeyore, Piglet et al, he spent a gloriously idillic childhood.

Set in post-war London, we are reunited with Christopher (McGregor ) as he returns from the front, to be met by his adoring wife Evelyn (Hayley Atwell) and daughter Madeline (Bronte Carmichael). As the years go by, Christopher finds himself settled into a comfortable but soul-destroying job as the manager of a renowned London luggage company.

Devoting most of his time to work and neglecting the special bond between him and Madeline, Christopher’s life is sent into further turmoil when a crisis at work keeps him from joining Evelyn and Madeline at his childhood cottage in Sussex for the weekend, a trip he’d been looking forward to for weeks. Things take a surreal turn when Christopher’s childhood toy bear Winnie the Pooh (voiced by Jim Cummings) appears unannounced, to remind him that there’s more to life than worrying about work all the time.

With a laudable humanist idea at the the heart of its story, Christopher Robin offers a heartwarming message of togetherness and triumph of good over evil, but is sadly unable to fully convince due to its rather disjointed and slightly contrived screenplay. Filmed in a deliberately sombre and downbeat style, the film does however deliver in the nostalgia stakes, even if some of our favourite characters appear to have acquired American accents in the proceedings.

Ewan McGregor excels in a role which doesn’t seem to demand much of him, but which he nevertheless manages to make his own from the get go. For her part, the brilliant Hayley Atwell (Avengers Assemble, Agent Carter) offers a scene-stealing performance as Evelyn, making you wish she was on screen more often. Elsewhere, newcomer Bronte Carmichael does an excellent job as Madeline and Mark Gatiss gives a suitably over the top performance as Christopher’s pompous boss Giles Winslow.

With a dialogue dripping with pearls of wisdom, and some rather endearing childhood mispronunciations, Christopher Robin will eventually succeed in winning its audiences over despite any earlier misgivings. Think of it as a warm hug from a relative you had long forgotten about, and who came back to remind you of who you really are. A charming, beautifully disarming a thoroughly touching adaptation, which whilst not being without fault, still manages to deliver on its premise of nostalgia and a pure, unadulterated sense of fun.