After decades of male dominated action thrillers, both Breaking In and Revenge open this week with female leads. Whether this represents a wider shift within Hollywood is yet to be seen but the action heroics of Shaun Russell (Gabrielle Union) are refreshing and very welcome. Breaking In is set within Shaun’s childhood home, which she […] 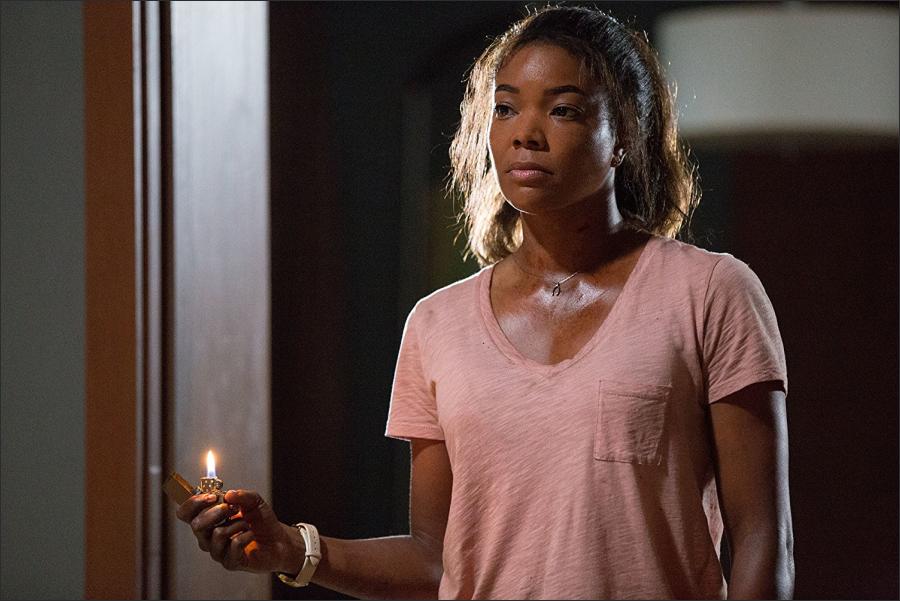 After decades of male dominated action thrillers, both Breaking In and Revenge open this week with female leads. Whether this represents a wider shift within Hollywood is yet to be seen but the action heroics of Shaun Russell (Gabrielle Union) are refreshing and very welcome.

Breaking In is set within Shaun’s childhood home, which she returns to with her children Jasmine (Ajiona Alexus) and Glover (Seth Carr) to settle the estate of her estranged father. Unbeknownst to her the house contains $4 million, hidden in a safe by her criminal father. Before they can settle in, four intruders break into the house and lock Jasmine and Glover in one of the bedrooms. Shaun is trapped outside and is left needing to find a way into the house to save her children.

Director James McTeigue is best known for his work on V for Vendetta. I have never been a massive fan of the film but in the years since its release it has developed a strong cult following and has gone on to inspire many a lazy Halloween costume. Aside from V for Vendetta, McTeigue has helmed a series of rather forgettable films including The Raven and Survivor. Breaking In unfortunately adds to this list.

For the most part, it plays out is a mixture of Get Out and Taken, minus the social commentary or exciting action sequences. Little thought goes into the invaders robbery, whose actions can be frustratingly inept. Eddie (Billy Burke), Duncan (Richard Cabral), and Sam (Levi Meaden) for the most part wonder round the house, aimlessly looking for the safe. Without any kind of plan the film meanders from one poorly thought out twist to another, as the filmmakers struggle to stretch the premise out.

While kidnapping dramas like Non-Stop and The Commuter can be contrived, they are at least entertaining and do bring the odd thrill. Breaking In by contrast is difficult to enjoy, with the break in attempts quickly becoming repetitive. It is not the kind of film where I’d expect a high minded concept but I was at least looking for a gripping plot, interesting characters, or well-choreographed fight sequences.

At only 88 minutes Breaking In doesn’t waste much time with pleasantries. Little is given away in terms of backstories, interests, or even personality traits. The relationship between Shaun and Jasmine, which lies at the dramatic heart of the film, never strays beyond cliché and is the same tense mother-daughter relationship we have seen many times before. While it is good to see two women of colour lead an action film and be so involved in the fights, the gesture is undermined by the unimaginative portrayal of the Latino intruder that borders on parody.

In the end, any good intentions are lost within the muddled script and undeveloped characters. There is little to suggest that Breaking In will be able to draw too many people away from Avengers: Infinity War.