RelatedPosts Film Review: Monsoon Film Review: Cuties Film Review: Tenet Film Review: Koko-Di Koko-Da They say that size doesn’t matter, but that’s unlikely to be of much consolation to the makers of Ant-Man and The Wasp. For having been requisitioned to follow on from the gargantuan critical and commercial success of both Black Panther & […] 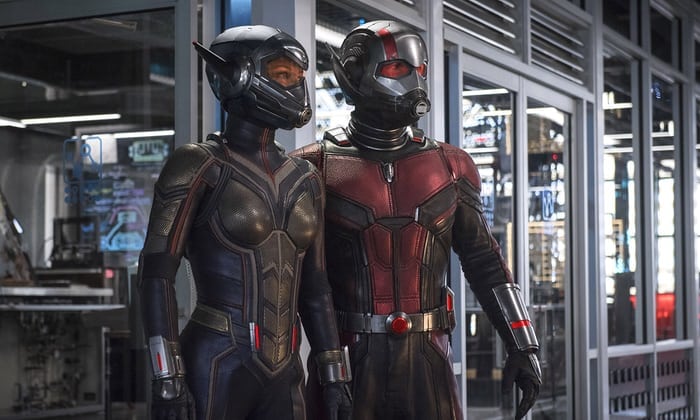 They say that size doesn’t matter, but that’s unlikely to be of much consolation to the makers of Ant-Man and The Wasp. For having been requisitioned to follow on from the gargantuan critical and commercial success of both Black Panther & Avengers: Infinity War, there’s no denying that, true to the heroes of its title, this 20th instalment in the Marvel Cinematic Universe feels a little, well… diminutive.

The story follows on from the events of Captain America: Civil War, with Scott Lang (Paul Rudd) stuck on house arrest, grappling with the consequences of his choices as both a father, and a superhero. He’s determined to finally go straight, spending more time with his daughter (Abby Ryder Fortson), and focusing much of his energy into opening a new security company with his best friend, Luis (Michael Peña). It isn’t long however, until Scott finds himself brought back into action again, with the reappearance of Hank Pym (Michael Douglas) and his daughter Hope (Evangeline Lilly) – now assuming the alter ego of The Wasp – propelling Scott into conflict with a new enemy (Hannah John-Kamen) who can predict his every move.

Fitting the bill as a light, discursive palate cleanser after the heavyweight clout of Infinity War’s gut-punch ending, fans will undoubtedly be kept amused by the frantic vigour of Peyton Reed’s direction here. And, of course, the punchy comedic timing of the cast: Rudd and Peña both bringing the same manic energy that best defined the first Ant-Man.

More problematic, though, is Reed’s inability to dramatically utilise his characters within the writing. That’s true of John-Kamen’s ill-served villain, but more frustratingly of Evangeline Lilly’s Wasp; the first female superhero to be credited in the title of an MCU movie feels like a significant step for a studio that has so often struggled to establish a representative gender balance, but here she’s regularly sidelined, called upon more often than not to simply spar with an onslaught of faceless villains. It’s fun, but flimsy.