There are many things one should say about The Eyes of My Mother, director Nicolas Pesce’s dark & disturbing debut feature, but it’s perhaps best to begin by declaring that this is not a film for the faint of heart. Indeed, even those with an unyielding tolerance for visual horror may find themselves squirming in […] 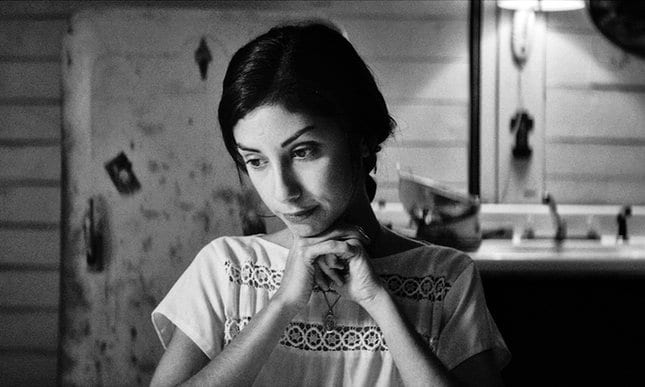 There are many things one should say about The Eyes of My Mother, director Nicolas Pesce’s dark & disturbing debut feature, but it’s perhaps best to begin by declaring that this is not a film for the faint of heart. Indeed, even those with an unyielding tolerance for visual horror may find themselves squirming in their seats at times whilst watching this maliciously macabre, yet utterly mesmeric monochrome nightmare.

If Hitchcock’s Psycho was to reimagined in a contemporary age, it may look a lot like this. Except that, curiously, The Eyes of My Mother is a film with no affixed sense of time. The setting is rural America, far off the beaten track – maybe only a stones throw away from Leatherface’s ranch – but the era is uncertain. The Carolina Buddies play on the radio, and William Castle’s House on Haunted Hill can be seen on the telly, but what lingers in the back of your mind is the thought that this isn’t a snapshot of the past, but the picture of an atavistic present that has somehow been lost in time.

The isolated centre of Pesce’s grisly tale is Francisca (Kika Magalhaes); a young woman consumed by the psychological fallout of witnessing her mother’s murder at an early age. Back in Portugal, Francisca’s mãe worked as a surgeon, and before she died, imbued her daughter with a deep comprehension of the human figure. Impelled by her own traumatic seclusion, and a desperately unbalanced desire to connect with the world around her, Francisca now seeks to further explore her understanding of the anatomy in ways that will have horrific consequences for those she meets.

Shot with a crisp black and white palette, Pesce builds fear predominately through sight and sound; using DP Zach Kuperstien’s expressive eye to capture haunting compositions of the desolate countryside, which he juxtaposes with an eerily silent sound design & composer Ariel Loh’s sparse & sinister score to vividly accentuate his protagonist’s oppressive loneliness. While it’s clear that he lacks some discipline as a storyteller – even at under 90 minutes, certain sections of the runtime feel laboured – what we see here is a refreshingly untamed filmmaker, with an assured ability to showcase how commanding cinema can be as a visual medium.

An emotionally austere performance from relative unknown Kika Magalhaes further enhances the atmosphere. She’s a layered & uncomfortably enigmatic presence, with a vulnerability that’s forcefully confronting. Working from a script that’s prone to dispensing with dialogue, its her physicality that compels our uneasy response; the insatiable longing and wide-eyed innocence in her eyes somehow drawing sympathy, even when Francisca’s sadistic actions scare & startle you.

Taking his cue from John Carpenter’s Halloween, Pesce has his camera pan away during the more viscerally shocking moments; like all good directors, he’s aware that our own imagination is more frightening than anything he shows us. From an audience’s point of view, this is a cruel & aggressive experience, but it’s one that effortlessly gets under your skin. Well worth hunting out then, but perhaps not suitable for those in search of a film for all the family this Mother’s Day.