Review by Leslie Byron Pitt/@Afrofilmviewer A fellow writer once nailed an aspect about movies that some secretly (some not so secretly) enjoy in one sentence when in debate with an associate: “Movies are often at their most interesting when they are problematic”. Granted, this was caught by me on a social networking thread, but I […] 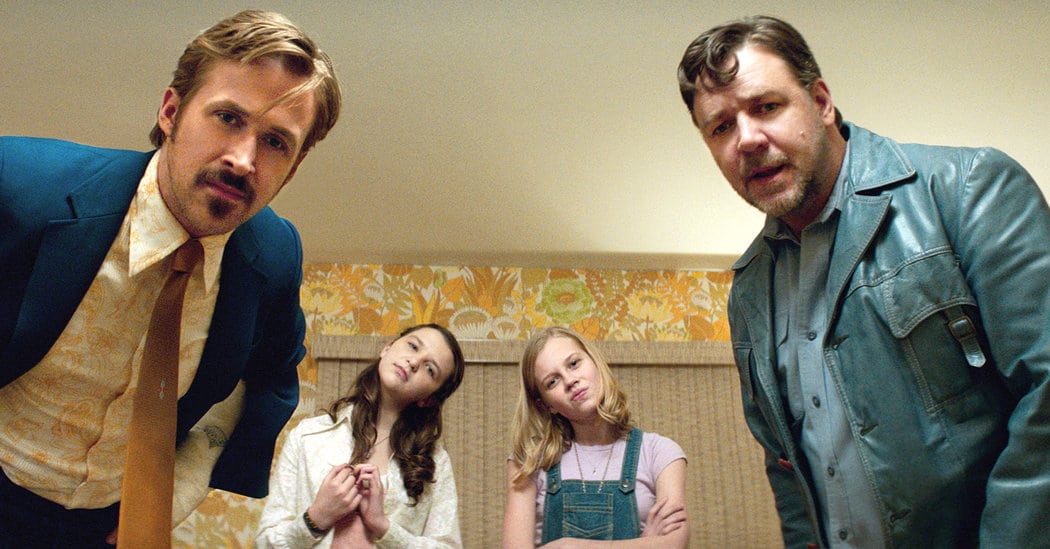 A fellow writer once nailed an aspect about movies that some secretly (some not so secretly) enjoy in one sentence when in debate with an associate: “Movies are often at their most interesting when they are problematic”. Granted, this was caught by me on a social networking thread, but I feel the statement stands pretty true. When a film is spiky, or jars with a viewer in a way that’s not completely comfortable with them, that’s where the film does its work. The Nice Guys’ comedic facilities are not the blackest to have graced the silver screen, however, it carries more than enough edge to have you shift in your seat. Hopefully to lean forward and roar with laughter, as this writer did in his second viewing of the film.

Shane Black eschews the leisurely Altman-like stylings of Inherent Vice (2014) and delivers a noir with a broader, more nihilistic edge to proceedings. Much like his 2005 offering Kiss Kiss Bang Bang, The Nice Guys land us within a morally bankrupt L.A. Where honour is only seen at school if your kids done well, and if you wish to make a salient point about the dastardly deeds of dubious companies, you may have to shove it in a porno film. Ryan Gosling’s Holland March is given ample time to vent his frustrations at one point, claiming that “The days of ladies and gentlemen are over” a statement which highlights his worry for his 13-year daughter Holly (Angourie Rice). It’s also a comment which shines a light on the lamentation of his generation and the one before him. Both March and Jackson Healy (Crowe) appear to be a two men at a loss on how to operate within a world which plays fast and loose with moral values. They may not be perfect themselves (taking a 13-year-old to a porn party doesn’t help.), yet Black is clear to try and highlight that these P. I’s may have lost their way, but they’re willing to try and find their way back on track, if only to save future souls if not their own.
If that sounds too heavy, don’t worry. Black’s film is often scabrous and farcical in the best possible way, with Crowe and Gosling knocking scenes out of the park with their strong comical chemistry together. Gosling in particular is at his most animated, inverting the ultra-cool persona we often see of him and bringing about a glut of reaction shots and exclamations (Jesus!) which one expects will make their way to GIF making programs very soon.

Extras: A decent array of small fluff pieces, cast interviews and the like. I’m sure what physical media fans would really want however would be a Shane Black commentary…

The Nice Guys is out on DVD 26th September