It is tempting to call Daphne an anti-romantic comedy but, while it is that to some degree, it’s also a much more complex and far reaching character study. Daphne (Emily Beecham) is a 31 year old chef living and working in London. The film is essentially a slice of her life, a brief period in […]

It is tempting to call Daphne an anti-romantic comedy but, while it is that to some degree, it’s also a much more complex and far reaching character study.

Daphne (Emily Beecham) is a 31 year old chef living and working in London. The film is essentially a slice of her life, a brief period in which she’s dealing with casual sex, a potential relationship with a bouncer (Nathaniel Martello-White) who might promise more than that, a mother (Geraldine James) who is treating her cancer with ‘alternative medicine’, a boss (Tom Vaughn-Lawlor) who’s in love with her and the fact she recently witnessed a stabbing.

Daphne is an impeccably crafted film. Nico Mensinga’s screenplay is tightly structured; little scenes that unfold new pieces of Daphne’s character and allow her to grow and change in organic ways and sharply observed dialogue that gives the character a dry wit without making her sound like she’s been working with a comedy writer’s room to come up with her banter. Similarly, Peter Mackie Burns gives the film a strong look, never more so than in the opening shot, which sees Daphne reflected in a mirrored wall as she comes down an escalator, the multiple images of her face perhaps suggesting the various aspects of her personality that the film will explore. This construction is strong, but it never feels artificial. For as tight as the writing is, it has the feel of something off the cuff and for as beautifully framed and lit as it can be, Burns also knows when to simply set the camera down and play the observer.

This combination of strong craft and a loose feel is also common to the performances. Emily Beecham gives what ought to have been an awards magnet of a performance. Daphne is a layered creation who hardly feels created at all, you get the sense that you could walk into any bar in London any weekend and meet a Daphne. We’re so used to characters in movies being simple: they’re either good or bad, there for us to fall for or to boo and hiss at. Real people generally aren’t like that, and neither is Daphne. One of the film’s most striking moments is when Daphne witnesses a stabbing in a shop. As she tends to the shopkeeper she gets annoyed for a second and says “Oh, you fucker” when he gets blood on her, but she also stays, calls the ambulance, gets him a picture of his family and goes to the Police after the incident. There’s selfishness in her initial annoyance, and it would be easy to judge that, but there’s a deeper compassion in what she does after that brief moment, more than many people would do.

Beecham is particularly adept at using small moments to give us great insight into Daphne. Another that seems particularly revealing comes when she tells a friend about witnessing the stabbing “You’re so fucking tough”, her friend says. Outwardly that’s true but throughout, and particularly in this moment, Beecham lets us see that just beneath the surface that it’s not as true as it might first appear. This comes through especially strongly in some of the later scenes of casual, empty, sex and in the storyline with her mother. Initially, Daphne is dismissive of her mother’s newfound faith in what she sees as hopeless remedies for the cancer that has recurred, but again, Beecham doesn’t simply play the sharply sarcastic criticism that Daphne dishes out, there’s always concern behind it, a sometimes grudging acknowledgement that even though they don’t always get on she’s worried about her mother.

In many ways this is a film about relationships, and about Daphne’s difficulty in forming them. Sometimes, as with the recurring speeches to men she meets on nights out about the fact she doesn’t believe in love (“you do realise this is a first date?” says one) we see this in what she says. Just as often though we see it in what she doesn’t say, as when she doesn’t complete a thought when talking to her boss, Joe or in her initial inability to wonder, even to herself, about the man she saw get stabbed. Beecham, Mensinga and Mackie Burns find organic ways to let the character grow throughout, but without making us feel either that she’s magically become a new person, or that everything is neatly tied in a bow by the end of the film. 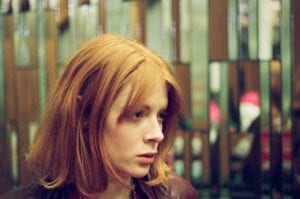 Beecham’s naturalism is reflected by the rest of the cast. Tom Vaughn-Lawlor does nice low key work as Daphne’s boss. His crush is obvious, but not defining, and the nuance he finds in a scene late in the film when he tells Daphne about it is both impressive and easy to identify with. Nathaniel Martello-White has only a handful of scenes as David, the bouncer who asks Daphne out. It’s a fairly simple role, but played with genuine charm and wit. As it does with Daphne herself, the film leaves us wanting to see more of him, wondering what might happen to him after the credits.

It would be easy to make a much more conventional film of Daphne; one where everyone makes snappy jokes at each other, cries in the middle, then hugs and learns at the end. Daphne, the character and the film, is messier than that. For me it’s perfectly encapsulated by a scene in which Daphne gets chatting to a pregnant woman on a bus. In a mainstream comedy there would be a few jokes and the scene would likely end with the cinematic equivalent of a minor character waving a big sign at Daphne, telling her what she needed to do next. Instead it’s much more low key and much more real than that; a conversation that starts out casual and ends up pretty uncomfortable, in a way that’s both relatable and funny. In many ways that’s the film in microcosm; it’s funny and a little uncomfortable because we recognise ourselves and people we know in it. That’s also why it will stick with you.