RelatedPosts Film Review: Tenet Film Review: Koko-Di Koko-Da Why you must know the achievements of Black Panther star Chadwick Boseman Actor reveals film the Queen loves & you couldn’t have guessed it Those who have been charmed by the wily confidence of George Blagden’s libidinous King Louis XIV in Versailles may find themselves taken aback […] 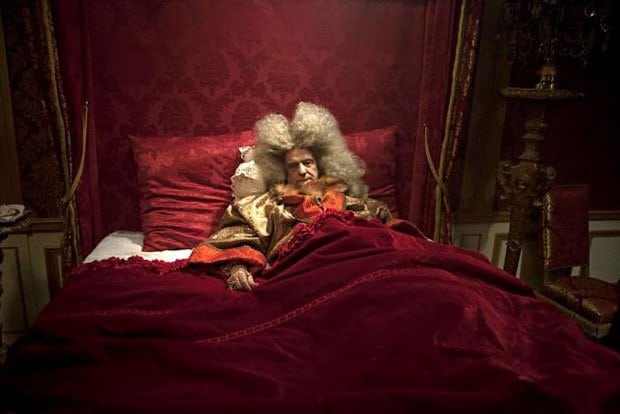 Those who have been charmed by the wily confidence of George Blagden’s libidinous King Louis XIV in Versailles may find themselves taken aback by Jean-Pierre Léaud’s frail and reclusive incarnation of the Sun King, whom we are introduced to at the start of The Death of Louis XIV: Albert Serra’s solemn chronicle of the monarch’s final days.

The palace of Versailles is no longer the buzzing hive of royal intrigue it once was, but an eerily quiet fortress from where the French sovereign now leads a sad, almost solitary existence: the muted lighting pervading the air with a dusty malaise. Having returned from a recent hunting expedition with a wounded leg, the king now spends much of his time resigned to his bedchamber, where his chief physician, Fagon (Patrick d’Assumçao), insists the king should stay until the injury has healed. But as the pain begins to spread, it soon becomes clear that Louis is not going to recover. And so he begins to die, surrounded by those who have served him loyally throughout his reign.

Serra’s measured pacing and staunchly minimalist style makes for an agonisingly languorous watch at times; the dramatic restraint within the script is stifling. And yet his austere approach helps to augment the film’s vividly despondent mood, capturing the wretchedness that’s felt by Louis as he’s forced to wait for death with an arresting severity – the amplified echoes of a grand old clock, ticking out of shot, reverberates with a haunting intensity.

It’s Jean-Pierre Léaud’s exquisite central performance though, his dark eyes etched with a withdrawn and dejected sadness, which draws out the film’s identity. By contrasting Louis’ commanding strength of character with an overwhelming sense of forlorn sorrow, Léaud instils in the role an empathy that allows Serra’s almost clinical storytelling to be infused with a pivotal degree of compassion. As a counterpoint to the much-lauded BBC series, it makes for mesmerising viewing.

The death of Louis XIV is in cinemas from Friday 14th July.