There’s a particularly telling scene early on in Ciro Guerra & Cristina Gallego’s riveting Columbian crime saga, Birds of Passage. Two friends are celebrating in a local shanty bar, reaping the rewards of their latest “business deal” – selling dope to members of the American Peace Corps. They raise their drinks, saluting the role capitalism […] 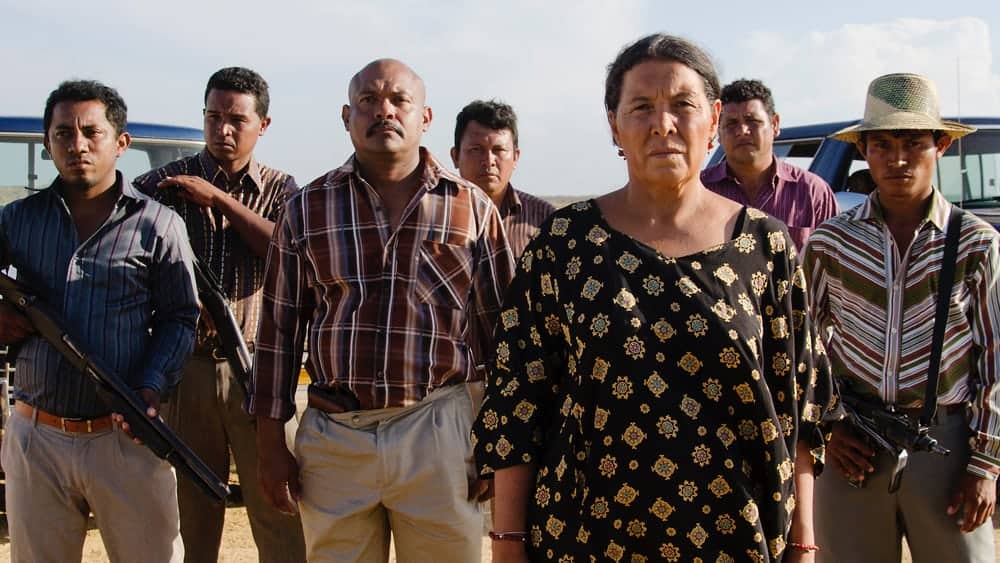 There’s a particularly telling scene early on in Ciro Guerra & Cristina Gallego’s riveting Columbian crime saga, Birds of Passage. Two friends are celebrating in a local shanty bar, reaping the rewards of their latest “business deal” – selling dope to members of the American Peace Corps. They raise their drinks, saluting the role capitalism has played in their newfound wealth.

Though not directly related, Birds of Passage is something of a companion piece to Guerra’s previous film (which Gallego produced), Embrace of the Serpent. That film ended with the image of an aging Amazonian shaman staring out on to a peaceful horizon in the mid ’40s, beyond which the embers of war burned bright. Fast-forward to the mid ’60s, and the world is once again ensconced in a period of great change.

In the Guajira Desert, however, the indigenous Wayuu population continue to live their lives strictly according to the archaic traditions of their people. We meet the somewhat innocuous Rapayet (José Acosta) determined to marry into a local Wayuu family having fallen for their eldest daughter, Zaida (Natalia Reyes). To be considered eligible by Ùrsula (Carmiña Martinez) – the family’s formidable matriarch – though, he must be willing to produce a hefty dowry. With only minimal funds at his disposal, it isn’t long before Rapayet – accompanied by his wayward friend, Moises (Jhon Narváez) – commits to a life of crime, shifting his cousin Anibal’s (Juan Martínez) hooch on the open market.

It’s a sprawling, well-articulated saga of how compulsive greed can destroy lives: Guerra & Gallego – working from a script by Maria Camila Arias & Jacques Toulemonde Vidal – compounding elements of Greek tragedy, with the distinctive stylings of Scorsese & Coppola. Although from an aesthetical standpoint – the vast, barren land ripe with danger, and rich with opportunity – it’s perhaps more akin to Leone’s Dollars trilogy.

Rapayet’s story is a familiar one. He’s drawn as something of Michael Corleone figure, struggling to maintain an inviolable sense of principle and control in a brutal, untamed world – the violence, ruthlessly sustained throughout, shocks in its savagery. His journey, which invariably sees a triumphant rise to power followed, eventually, by an ignominious fall, adheres to a structure we’ve seen replicated in Hollywood films since the advent of the medium.

With a soulful eloquence, though, Guerra & Gallego thematically transcend the limits of the narrative. It’s a long film, certainly – just over two hours in length, and so involved that at times it feels longer – but one that rewards your patience. The Wayuu people are guided by a profound sense of spiritualism, Martinez’s domineering empress bound by her own ancestral code of honour that’s irrespective of that which compels Rapayet and his men: hers is an unyielding resolve to preserve the family bloodline at all costs.

Bookending Rapayet’s tale is a singing shepherd, who monologues in blunt metaphor about how Columbia has become consumed by its own avarice; the merciless lure of capitalist greed. Throughout, Ùrsula predicts that a great, biblical plague is coming for them, as a punishment for their sin. The conclusions posited by the directors, however, suggests it has already arrived.