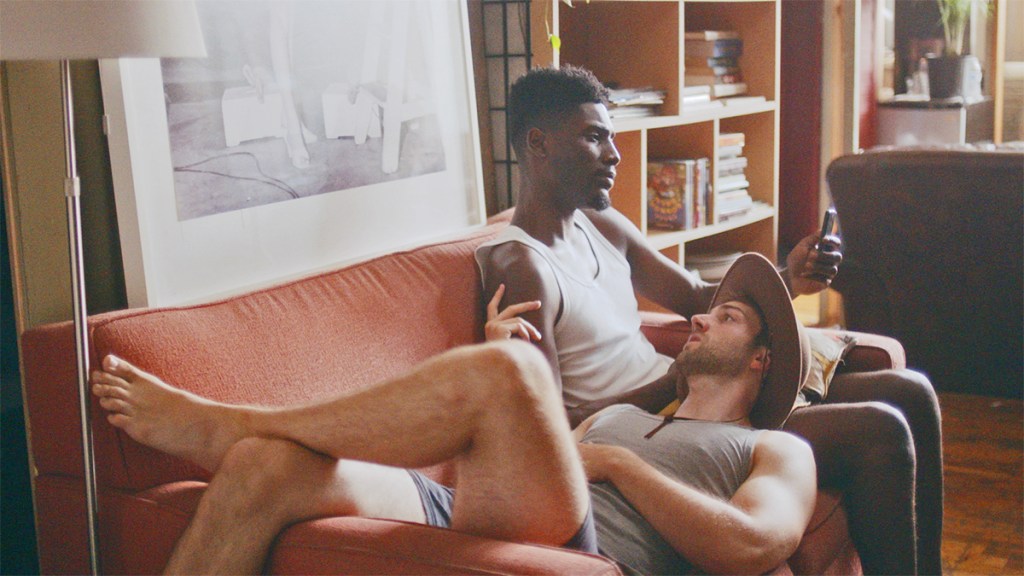 An autobiographical story of Matt Fifer’s own troubling childhood experience sees the light of day at this year’s London Film Festival.

Cicada is a familiar account of burying oneself in earthly vices in a bid to distract from internal discontent, such as heavy workloads, alcohol, drugs or copious amounts of sex.

Such is the relentless pursuit of 20-something Ben (Fifer, who also co-directs, co-writes and co-produces) to avert from the looming horrors of the past. These chronic issues flare up under the microscope of a newfound relationship, where his behaviour is reflected back to him in Sam (Sheldon D. Brown, also on writing credits).

The first five minutes of Cicada is collage of ample sex and nudity, detailing Ben’s countless flings with a multitude of partners: men, women, older, younger, friends or co-workers, in all manner of positions and locations. Granted Ben fits the mould of a ripped, Aryan blue-eyed Grindr pin-up; his successful sexual prowess come part and parcel with his befitting natural attributes and alluring aloofness. But, as he confesses to his therapist (a hilarious Colbie Smulders), this obstinate quest for carnal satisfaction is a symptom of his inability to emotionally connect.

Sam’s irresistible good looks and reluctance to dive into sex immediately intrigues Ben, but also coincides with an unprecedented period of self-realisation. As the initially tender relationship unfolds, it becomes intermittently prickly. Barriers come down to the revelation of Ben’s childhood abuse; spurred further by a simultaneous news story, emanating from a background TV or a car radio, about an arrested paedophile. For Sam on the other hand, this newfound intimacy challenges his reluctance, his closet-ness; the result of a shockingly violent hate crime that has left him with a serious health condition.

It’s a case of misery loves company, as the two try to create a semblance of a relationship. Yet their perennial triggers lend themselves to frequent arguments and over dramatics. It’s surprising this couple holds out for so long. This convoluted intimacy, reminds of the relationship in Michael Haigh’s Weekend, but perhaps the intensity on this occasion is dialled down, credited mainly to Fife’s understated, monotone, almost placid demeanour. An insular soul who has created this detached outer shell to contain all his simmering anxieties.

Fife overpacks the film with superfluous strands and characters, interjected by montages of hipster Brooklyn scenes of their stylish makeshift apartments in Williamsburg, riding vintage bikes, wearing straw hats, drinking craft ale in the park. These recurring visual mosaics are undeniably gorgeous but subvert the film’s tone repeatedly. One scene could be a flashback to Ben as a traumatized child switching to an uncorrelated moment of blissful coupledom accompanied by backing track of Grizzly Bear.

The interracial nuances of the relationship is slightly, if forcely, addressed. Sam is subjected to a dinner with Ben’s white friends, having to endure clumsy and ignorant commentary. Tightening relationship tensions further. There’s also the complexities of his familial home, a dizzy, doting mother and absent, dissaproving father. As well as the pronounced presence of his comical therapist whose pseudo-humanistic approach is entertainingly uncomfortable. A plethora of hit and miss moments, that are charming, nonetheless.

Beautiful idyllic dream-like moments of New York make up for a lot in Cicada. As well the rarity of Fife using this platform as form of catharsis. Providing a much need template for people in similar predicaments to identify with; making his film a particularly poignant one.