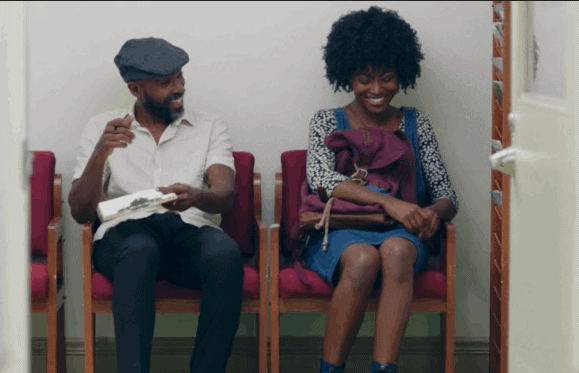 Director Ekwa Msangi casts her genial eye over this intimate tale about a family’s reunion after seventeen long years. Opening scenes of Walter (Ntare Guma Mbaho Mwine), a migrant who settled in New York after fleeing war-torn Angola, anxiously waiting at the airport to be awkwardly reacquainted with his with wife Esther (Zainab Jah) and daughter Sylvia (Jayme Lawson).

A lot can happen over seventeen years. Sylvia has grown up without a father, Esther found solace in Christianity and Walter has formed a relationship with someone else. Coming together was bound to have its teething problems, differences from being apart surface full throttle, augmented further by the limited room in Walter’s one-bedroom apartment.  It’s hard to imagine how a family has spent so much time apart, likely a common occurrence among migrants the world over; debunking myths of riches one can earn in the west on low-paid jobs. Perhaps it boils down to the simple choice of sending money back home verses using it to pay for expensive flights.

The tribulations of this reunification are told threefold, in segments, detailing each family member’s perspective, with each character defining their own interpretation of events. Walter is expected to revert to a person he is no longer and perform his spousal duties forsaking a love he is more familiar with than his own wife.  Sylvia is supposed to be delighted to be in New York and ignore the fact she was dragged away from a rich life with close friends in Tanzania to live in a strange place with a dad she feels abandoned by.

It is Esther’s portrayal that outshines. Living through war, forsaken by her husband (even if consented), fear from being alone even if it means staying with man who no longer loves her. Her zealous faith dominates the family, cockblocking Walter and suffocating Sylvia in the process . Her religious paranoia freaks out on the mere action of him bringing home wine. Its the meatiest part from a noteworthy Jah, eloquently constructing all of Esther’s internal complexities and contradictions. A storyline that would suffice as a stand-alone film.

Msangi’s use of warm, muted tones and a moderate pace aided further by a claustrophobic sensation from the confined space the family inhabit, convey a very distinctive sensation. The triptych format allows for the nuances of each perespective to shine, yet it dresses a rather basic premise, as each segment doesn’t necessarily provide further plot development. It does, however, paint in-depth characterisations and most importantly it provokes thought by portraying these very real familial dynamics and the cross they’ve beared at the cost of migration and displacement.