Snuff is one of the best known and likely one of the least seen of the video nasties. The title and its reputation have passed into urban legend and served as one of the major boogeymen of the moral panic around the nasties, with the rumour always circulating that this was the film that showed […] 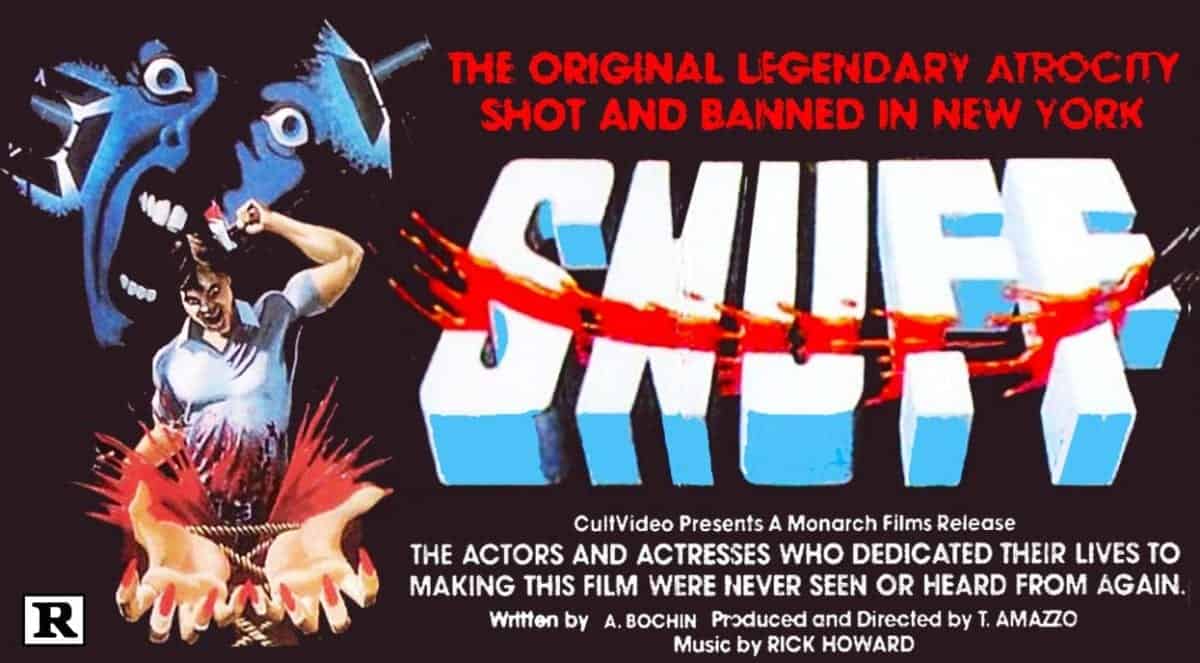 Snuff is one of the best known and likely of the least seen of the video nasties. The title and its reputation have passed into urban legend and served as one of the major boogeymen of the moral around the nasties, with the rumour always circulating that this was the film that showed a real murder. If it had been more widely seen, people would realise how funny this is.

The long, weird and fascinating story of Snuff begins with Slaughter, a terrible exploitation film very loosely based on the cult surrounding Charles Manson and the ‘Manson Girls’. Slaughter was made in Argentina in 1971 by married couple Michael and Roberta Findlay, who also made films like The Touch of Her Flesh and Satan’s Bed, which starred Yoko Ono several years before she met John Lennon. Slaughter wasn’t a notable work; an inept and nonsensical shocker made to cash in on whatever embers of exploitable content remained in the Manson story, with truly offensive dubbing, it came and went with little or no notice.

That would have remained the case had the Findlay’s distributor Allan Shackleton not wanted to cash in on the urban legend of ‘snuff’ films, in which people were supposedly actually murdered on camera, for films to be shown at private parties and passed around an underground network. In 1976, using another crew, and without the Findlay’s knowledge, Shackleton shot a new closing scene for the film. A savvy promoter, Shackleton hired fake protestors to drum up publicity for Snuff, which real protest groups soon cottoned on to, ending up doing Shackleton’s work for him. This is how Michael and Roberta Findlay found out what had been done with their film. They sued Shackleton, but settled out of court. Shackleton’s tricks didn’t end there, he created fake newspaper clippings about a fictional attorney trying to suppress the film. The group he invented for that story, Citizens For Decency, turned out to actually exist, but apparently still rallied to this attorney’s cause. This and more all happened before the film was shown. Later, Roberta Findlay left her husband for Shackleton, and they went on to produce hardcore porn films together. Why isn’t THIS the movie I had to watch?

So, I suppose we have to talk about the film. The bulk of it is Slaughter, a saga about Terry London (Mirtha Massa), an actress who is in Buenos Aries to make a film with her producer boyfriend Max Marsh (Aldo Mayo). Terry is also sleeping with Horst Frank (Clao Villanueva), a rich playboy who is, in turn, sleeping with Angelica (Margarita Amuchastegui). Angelica is a member of a girl gang/cult headed by Satan – pronounced S’Taan – (Enrique Larratelli). Basically, everyone is sleeping with everyone (Terry eventually also with Horst’s dad) and the girls in Satan’s group sometimes kill people. This is intercut with terrible stock footage of Carnivale and irrelevant flashbacks to make something, I guess, in the strictest terms, one could call a movie. Then comes Shackleton’s addition. At the end of Slaughter, the camera now pulls out to show the crew shooting the final scene. One of them talks one of the actresses into ‘getting turned on’ with him and the crew begin to film. The actress is then murdered and the film ends with the camera running out of stock. There are no credits.

It’s no surprise that Snuff made its way on to the DPP list, its reputation would have preceded it and the very title is a byword for the most extreme content imaginable. It’s another title about which I wonder if any of the people who wanted it suppressed actually bothered to watch it. The bulk of the film is barely objectionable. There are some killings shown, but they are all completely ineptly staged, with several of the shooting deaths seemingly accomplished entirely without the aid of squibs. Outside of this, the dubbing is so poor and so distancing that even if the violence were any more convincing, you’d still be too busy laughing to be disturbed by it. An incest story in a late flashback might have troubled the board, but the crux of the problem is clearly the final scene.

If the DPP, or the people compiling the list, ever did look closely at Snuff, I suspect the absolute gratuitousness of the scene that gives the film its adopted title would only have accentuated their problems with it. It is, in many ways, the definition of exploitation cinema; a scene inserted into a film purely for sensationalist reasons. For a while, as seduction turns violent and the attack begins, it’s fairly disturbing. The initial moment of the knife cutting into the nameless young woman being attacked has more than a little in common with the moment Krug cuts his name into Mari’s chest in Last House on the Left. Then everything becomes more extreme, and any suspension of disbelief goes out the window fast, as rubbery fingers are cut off, followed by a false hand so badly added that you can see the join with the actress’ arm. Then comes the disembowelment, which would be nastier if it weren’t obvious that most of the actress’ torso is under the bed and that her assailant is cutting into a poorly concealed container of pig guts. It’s nasty enough to blind a few people who have been fed the story to the obvious effects, but it won’t fool many in this day and age.

Snuff has a very strange release history in the UK, in that it doesn’t really have a release history. Astra were going to release it uncut on VHS in 1982, but that release was cancelled, though imports and bootlegs did find their way on to the market, often under the counter. An interview with Exploited’s Carl Daft in David Kerekes and David Slater’s See No Evil (the seminal book on the nasties) relates that Exploited looked into picking up Snuff to release, intending to pair it with a documentary on the snuff movie urban legend. Daft says that the BBFC wrote to him saying whether or not he put a documentary on the video, it wouldn’t alter the fact that Snuff was not the kind of film that was suitable for British viewing. Exploited never released Snuff. In 2003 though, Snuff was finally granted an 18 certificate, in its uncut form. Blue Underground submitted the film for DVD release. That release, too, was cancelled.

Snuff exists in a strange kind of limbo. It likely still holds a fascination, and I suspect if it did come out in any heavily publicised way the tabloids might still try to play on its notoriety. It is the most undeserved of cult followings, and yet, I wouldn’t want this film to simply disappear. Everything that surrounds Snuff is fascinating; its making and exploitation, the controversy around it, the underground nature of the film’s distribution in the UK and the fact that it still seems to appear and disappear from our release schedules. It’s a pity the film itself is , deeply boring.