By Emma Silverthorn @HouseOf_Gazelle I haven’t laughed so much at a movie since Withnail and I. Not that Appropriate Behaviour is exactly of Withnail’s ilk, it is as the elevator pitch goes: a mix between Frances Ha and Annie Hall. Yet the realistic hilarity and absurdity of the characters struggles are that of Withnail’s, (very […] 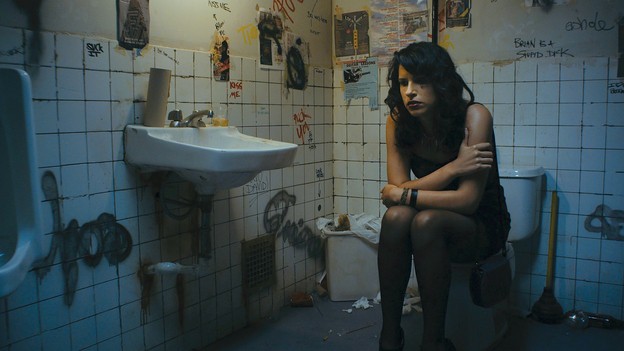 I haven’t laughed so much at a movie since Withnail and I. Not that Appropriate Behaviour is exactly of Withnail’s ilk, it is as the elevator pitch goes: a mix between Frances Ha and Annie Hall. Yet the realistic hilarity and absurdity of the characters struggles are that of Withnail’s, (very high), standard. Like contemporaries Lena Dunham and Miranda July, Desiree Akhavan’s art is of the personal-to-the- point-of-over-sharing kind, and Dunham is unsurprisingly already a big fan; hence the recent Akhavan Girls cameo. And, like July and Dunham, Akhavan chooses to write, direct and act in her own work.

The narrative focus here is split between the intertwined themes of protagonist Shirin’s (Akhavan’s) recent heartbreak and the difficulty of coming out as bisexual to her Persian family. Much of the humour is derived from witnessing Shirin’s attempt at juggling two lives, that of a progressive, Brooklyn hipster and that of a good, immigrant daughter. When her family is critical of her new Bushwick apartment Shirin retorts, “You don’t even know what a cool Brooklyn loft looks like!”.

This is a world where kombucha-brewing is a serious pastime, your housemate has her own taxidermist and an OK Cupid date means drinking booze on a sidewalk from a brown paper bag with a guy whose in an “stand-up, folk music hybrid”. It’s also a world where five year-olds attend film classes. And though I’m not generally into toilet humour I could not stop laughing at ‘The Tale of the Lost Fart’, the short-film Shirin helps her class of five-year olds create.

Moving on from that to more weighty issues, one of my favourite things about this film was Akhavan’s total nailing of some common aspects of second generation, middle-class immigrant life. When Shirin tells her new boss, (who of course never learns to pronounce her name correctly), that she’s of Iranian origin he asks her what she thinks of “that whole situation over there?” to which she replies, “it’s a mixed bag”. Later, when Shirin’s girlfriend Maxine (Rebecca Henderson) is enchanted by the Persian tradition of New Year fire jumping or Chaharshanbe Suri, Shirin has a realisation, “oh my God you’re totally having an I love dating an immigrant experience right now”, she says. It struck me as being in the same vein as ancedotes a Californian friend, whose parents are Indian, had told me. Stuff like how often strangers confess to her that they just love Indian food, or drone on to her about the spirituality of India, or even (wow!) that their doctor is Indian. Shirin is used to having others expecting her to speak for, or represent an entire nation, as well as being exoticised by her roots.

For all these reasons and more Appropriate Behaviour, is very, very funny yet and like Annie Hall, (the comparisons are justified), these are laughs with real heart, just not the syrupy kind. Shirin’s family come across as loving and mostly pretty cool despite having some more traditional, (read: slightly homophobic), values. And despite Shirin’s feeling that she’s not quite living up to their ideals, or at least to the standard set by her seemingly more successful brother, a urologist marrying a beautiful (and ethical) plastic surgeon. Plus, and above this, there is the real fuel that fires the story of Appropriate Behaviour. That is, Shirin’s often half-arsed yet ever present, search for identity and happiness despite, or because of, the immense pain of her heartbreak.

Maxine might not be right for Shirin, from the audience’s viewpoint this seems clear from their first encounter, yet you can see why it still hurts like hell when it doesn’t all work out. After all it’s hard to find someone whose the same “kind of stoned-person” as you are, or who appreciates that the main things you are good at are “drinking and dancing”.