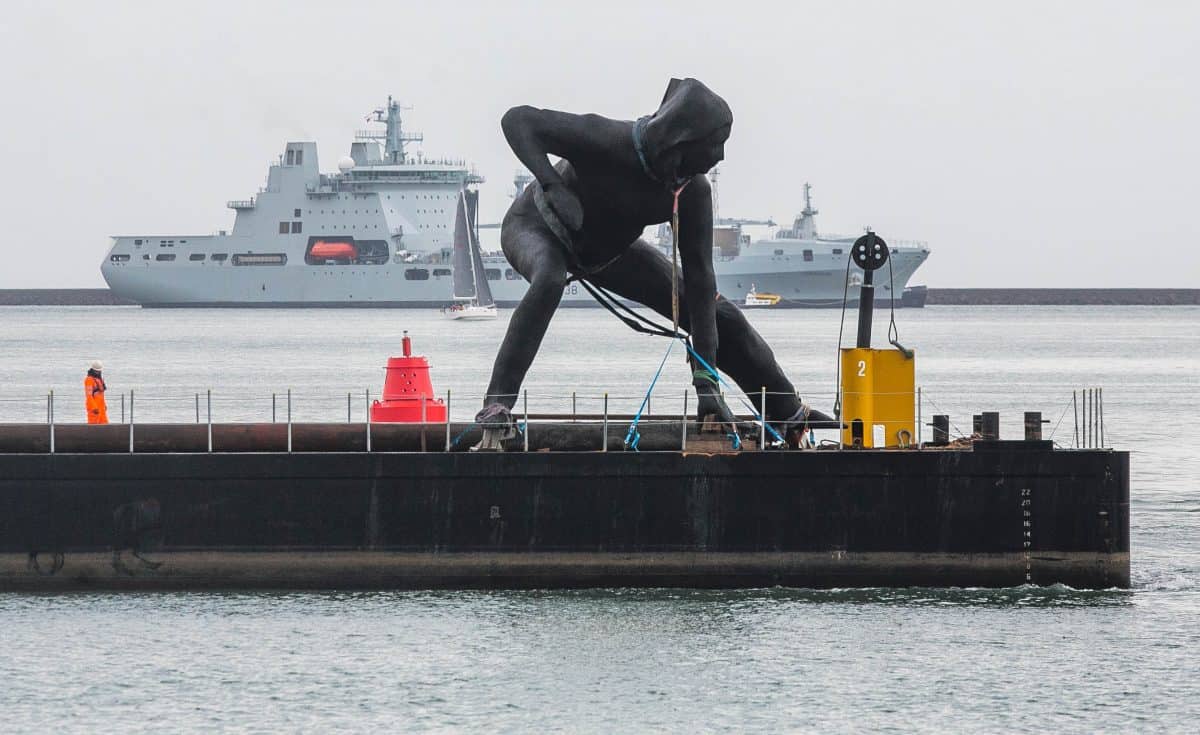 The UK’s largest bronze statue that shows a squatting woman has been pictured arriving on a barge – after being nicknamed ‘Radcliffe’s Revenge.’

The 23ft high sculpture of the crouching female figure is being put on display outside a theatre.

Locals christened the creation – officially named Messenger – in honour of the athlete Paula Radcliffe after she stopped for a toilet break during the London Marathon.

The £450,000 public art project was widely ridiculed in Plymouth, Devon, with one objector even threatening to create a rival statue outside the council HQ – of a PENIS.

Another protester argued that it “denigrates and demeans women” as visitors to the theatre would have to walk through her legs and “underneath her private parts”.

But despite the controversy a large crowd gathered this morning (Monday) to witness the 30ft wide sculpture’s arrival as it was paraded into the Plymouth on a barge.

The sculpture arrived in Plymouth after a 270-mile journey from the Welsh foundry where she has been built after it was broken down into four sections to allow for transportation.

It was re-assembled at HMNB Devonport and was floated across Plymouth Sound on a barge pulled by a tug.

It then arrived at Plymouth Millbay Docks where it was craned onto a low-loader before being driven through the city centre to its final destination.

The 10-tonne creation was made from more than 200 panels at a foundry in Wales by Cornish artist Joseph Hillier.

He said he was inspired by the movement of an actor rehearsing at the Theatre Royal where she will take up residence outside.

A spokesman for the theatre said: “We wanted to do something bold that reflected the creativity that is at the heart of the Theatre Royal.

“It will create a unique landmark for the city and strengthen its cultural offering.

“In time, it may become one of those iconic statues that destinations become forever associated with.”

Visitors will be able to walk between Messenger’s legs “into the theatre, like an archway”.

The Theatre Royal said it was “by far” the UK’s largest bronze sculpture by volume, at 25.6 cubic metres and more than 30 crafts people were involved in its creation.