For those who appreciate such body horror classics as Clive Barker’s Hellraiser then, to paraphrase Pinhead, step forward for L.A. Mason has “such sights to show you” 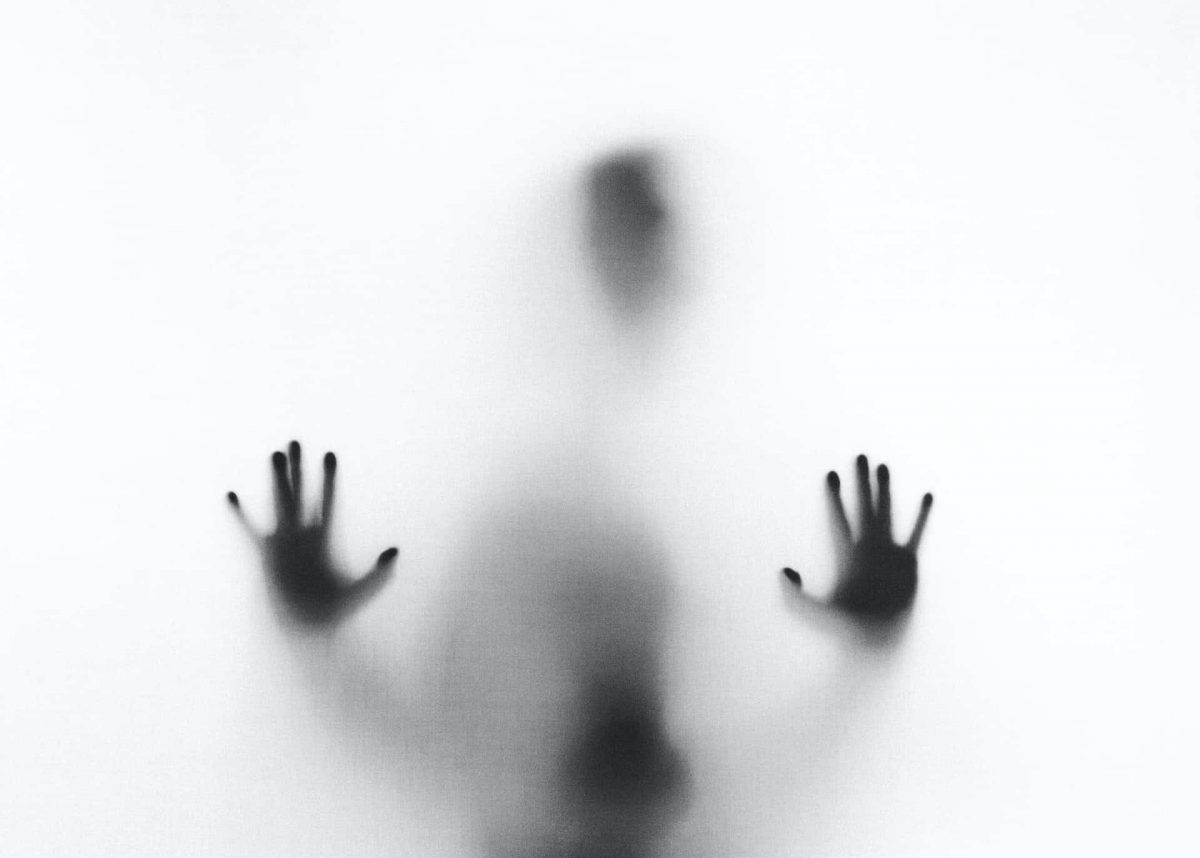 The work of biological horror poet L.A. Mason is not for the faint-hearted. Shocking, grotesque and graphic, if it were a film then it would come with an 18-certificate. But while undoubtedly disturbing, there is a strange beauty to the author’s visceral, nihilistic verse that has been winning him fans from within and without the horror community.

In this exclusive article, the writer provides an introduction to his debut collection, Ovum of Risk, and the enduring appeal of the macabre. Be warned, the following passages contain some strong language and unpleasant concepts. But for those who appreciate such body horror classics as Clive Barker’s Hellraiser then, to paraphrase Pinhead, step forward for L.A. Mason has “such sights to show you”…

When revulsion, fear and anxiety can now be induced by merely presenting oneself a few alarming millimetres, less than 1,000 of them away, from another person, that Covid-19 has impacted psychologically can become for us, within a particular sense, an erroneous conclusion. Hypothetically devoid, as is the case here, of the disease’s actual presence, the mere threat of coronavirus has triumphed over us all.

Viruses are like that. They can make us fearful when they do not manifest. They can also make us fearful when they do not even exist, or are at least too dormant to be noticed. We can, for instance, via a textbook, existentially pick The Black Death to terrify us, and yet still believe that The Black Death itself is responsible for our terror. (My humble recommendation here, by the way, is to select my own poetry collection, Ovum of Risk, and allow that to terrify you instead).

Frightening ourselves can be entertaining. There is something unashamedly—exhilaratingly—gratifying about the perverse transfiguration of 19th century French novelist Émile Zola’s character Nana. She descends from a beautiful prostitute to a liquescent, smallpox-ravaged yet still beautiful corpse; this occurring after many years of apparent incarceration. Existence within a genetic, and ineluctable, trap.

There is something gratifying, too, about the grotesque, partly cubistic, malformations of George Dyer et al in the canvases of artist Francis Bacon; maybe as trapped in their miraculously non-naturalistic orange and pink interiors as a foetus in its womb (in the absence of a miscarriage or abortion, condemned to live). Likewise, there is something exhilarating about a bard (yours truly) from a dirty dock-and-beach-exterior wilderness that was Swansea as he unintentionally developed—even honed—avant-garde body horror.

There is nearly always the impression when reading poet Dylan Thomas that the physiological (the apparatus we use to procreate, recreate, even urinate or defecate, our way through existence) would be, despite referrals to transcendence, confining, even disgusting, if the language, replete with uterine/foetal/sexual organ references, was not sublime or did not parallel the biblical in all its power and drama. Thomas made the biological wonderfully rhetorical. The genre of body horror, then, can be made broader via the recognition and incorporation of unusual influences. It can also be made avant-garde through terms in biology being used within a literarily potent way.

The vantage point from Ovum of Risk is on the biological, too, through something not ubiquitously—even generally –considered to be horrific: sex. Though mostly alluded to throughout the collection, that the impulse to either conceive or engage in sex is blocked emerges immensely strongly. But what is the disturbed, unnamed protagonist of the work avoiding? Surely not exclusively the vagina, that “horrific crevasse beneath a bikini line” (from my poem ‘When juggernauts break them’) or an “episiotomic gash” (‘Stop it’);  the hideous organ that author Henry Miller, in Tropic of Cancer, acknowledges, within a desexualized context, it can be. Depriving a potential sexual encounter of love, friendliness or affection—or even of ‘healthy’ lust—can reduce it to far more than the merely revolting:

(vile man with no condom)

to make her ovaries brutal”

The sexual act aside, in Ovum of Risk what a fertilized female egg may become is the central concept upon which the work is based. Each new life represents the threat of yet another ultra-mundane, potentially anti-social existence going out into the world, using the streets, and forming what is commonly referred to as ‘pond life.’ Or, in our protagonist’s view, marine life. He, hallucinogenically, perceives people as “with pincers that grow from cuffs aloft” (‘Crabs’) as they sidestep pedestrians, dangerously cross the road, or steal from shops. “NO BEEPER GOING IN ONE GOING OUT,” (‘Cybernetix’) with tedious, portrayed satirically, community spying machines based upon constructions and which monitor oceans from outer space, arriving before the crustaceans leave.

“The satellites are coming

to broadcast who they nicked

the satellites are coming

to those in crowds who kicked

(‘The satellites are coming’)

Of course, our protagonist could be a crab himself. He certainly does not imagine himself to be an extremely prominent, though still notorious, individual. He is a dictator of a kind initiating war and destruction, and creating “a wreckage of abodes… enclosures of black rubble,” (‘The forewarning’) progeny of his own, or perceiving others perpetuating them as…

an infinitude of deaths and future births”

There are other undesirables amid these two extremes which are not identified here. The solution, however, is and is articulated savagely in the tagline of Ovum of Risk: “Kill Before Birth. Kill After”.

“Kill before twenty-eight days are up

Kill him by withdrawal

After (making sure you have ‘thoroughly’ murdered the intended victim. Certainly, do not bury them alive):

Or, at least, ‘deal with’ death early. Obsessively compulsively, perhaps, make totally sure…

This panacea is a grim, absurd, nihilistic and, eventually, apocalyptic one, with an implicit death of human birth/death of human death philosophy accompanying it. Only authentic marine existence managing to endure, and emerge with population (homo sapiens) decline. Not that the protagonist ever wishes to be one of the murdered himself. In fact, he wants to regress; become a bizarre, homicidal, pre-birth monster…

“A foetus which could have drowned the world in diarrhoea

and killed at just nine pounds and seven ounces”

Maybe only the extremely late introduction of overt humour in the form of a much-neglected prosodic form (though my favourite writer, Dylan Thomas, used it) can counter the ferocity of the collection and its obstinate tenor of the macabre. That is, an apparently incongruous form of verse, the limerick, which is used to highlight the Ancient Greek practice of killing babies with deformities. However, an extremely early, ideological, twofold part of Ovum of Risk may still be powerful enough to pre-counteract this. One, conception has particular, and innate, negative properties which proactively, pre-emptively, condemn the unborn to a future void of dominance, importance, or volition; and two, that these weaknesses can be created by a merciless, brutal, fanatically domineering, and telepathic, will. Either one is  expressed by the idea that there is…

“No revelation within semen.

No will in spermatozoa within.”

Ovum of Risk by L.A. Mason is published through Black LAMP and is available now on Amazon , priced £8.99 in paperback and £4.99 as an eBook. For more information, visit www.blacklamp.net

Q. Your poetry is, in a word, shocking. What impact do you want to have with book?

A. To impact upon society within the twenty-first century (although not through rioting) in the way that Un Chien Andalou, with its razored-eye sequence; satirical Catholic references; and obsessive sexual repression, did in the twentieth.

Q. Your writing has an element of social satire to it. Can you explain what you are satirising, and why?

A. An element of social farce or parody is stronger. My target is the way that people in crowds interact, and how that reflects implicitly the overcrowding perspective of the ‘hero’ of Ovum of Risk.

Q. You have released your first book of poetry at the age of 51. What motivated you to become an author at this stage in your life?

A. The temporal, disturbingly fragile nature of the human body through a binary diagnosis of Parkinson’s, and Graves, Disease, and how confining, how horrific, that phenomenon is.

Q. What one poem from your collection would you introduce to new readers, and why?

A. The first poem in the collection, Ovum of Risk. This contains the central concept of a concept-led poetry book.

Q. If you could meet any one of your artist inspirations, what would you ask them?

A. I would ask Dylan Thomas what he thought of Ovum of Risk.

Q. The titular first poem in your collection contains a reference to the infamous surreal film Un Chien Andalou. What prompted you to include this, and are there any other notable literary ‘Easter egg’ allusions within your writing?

A. We receive more information through our eyes than any other of our sense organs, and yet much of what we encounter visually is not actually seen. It is not processed but filtered and censored out. It is conceivable, though, that what we sexually desire tends to endure within our brains as lust which, in Ovum of Risk, needs to be eradicated. Any resulting intromissions should not be allowed to outcome ‘impregnatively’. Cut the lust from the eye out, as described in Ovum of Risk, retrospectively, in order to kill the embryo that came before a human birth, and before a human life.

There is a far less oblique allusion. ‘Le Bete Exterieure’ (‘The Outer Beast’) towards the end of the collection, is a reference to Emile Zola’s La Bete Humaine (‘The Beast in Man’) a novel about a man who equates sexual arousal with murder. Though many other themes are introduced, worked on, in this poem, the equation is still relevant thematically.

Q. What has been your biggest challenge with writing poetry, and how did you overcome it?

A. Thanks to my Parkinson’s, trying to sit still when typing. A combination of medications and/or medication changes/ingestion timing is ongoing to sort this frustrating problem out.

Q. Poetry is a notoriously subjective genre, but what do you think are the key elements to writing effective poetry?

A. To utilize—however avant-garde, surreal, or absurd my style—a sense of form. Rhetorical devices too.

Q. What’s next for you as an author?

A. I have been working on another concept book of biological body horror poetry which is called ‘Insectan’. This examines multiple forms of interactions between the human and insect world. Typically, horrifying ones.