On a personal note, a stored image returns to the forefront of my thoughts as summoned by the reading of Bill Hayes’ achingly beautiful memoir Insomniac City. It is a February night in 2010, a Toronto winter considering an early spring, a night four hours’ distant from consideration of a whispering dawn. I am stood […] 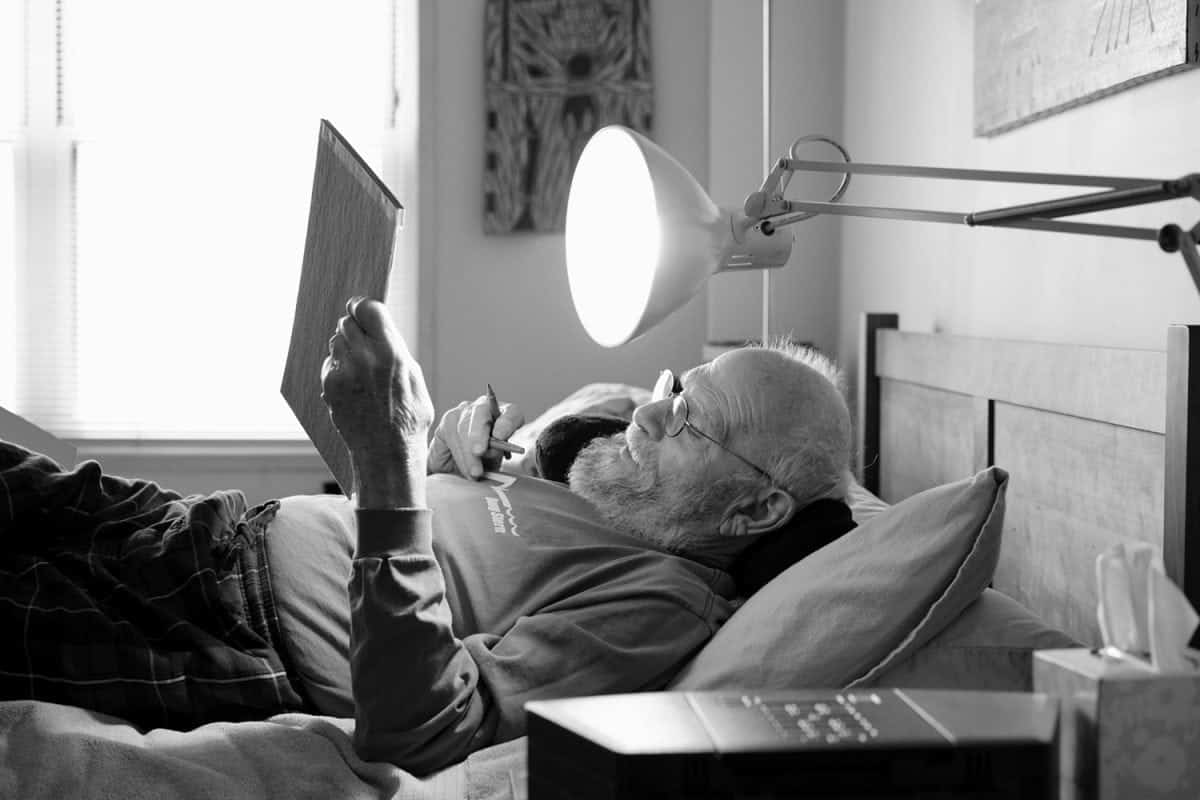 On a personal note, a stored image returns to the forefront of my thoughts as summoned by the reading of Bill Hayes’ achingly beautiful memoir Insomniac City. It is a February night in 2010, a Toronto winter considering an early spring, a night four hours’ distant from consideration of a whispering dawn. I am stood outside an all-hours McDonald’s smoking the fifth cigarette of the first pack after I had given up quitting. My eyes followed the mix of smoke and steam as they rose to frame the hospital one block away, the hospital where my lover’s brain was struggling to re-assemble itself after an aneurysm had scattered her brain segments like cardboard jigsaw pieces stirred in hot water. And right then, in that moment, three bicycle riders rode past in a line down Dundas Street, each one in black swallowtail coats and black top hats, each bicycle with a lantern attached to the handlebars, each lantern covered with a thin gold shade whose tassels formed speed lines as the bicycles rode past. When I choose to remember that night (I rarely do), I remember the bicycles of Dundas Street; they carry me back.

There is always the risk of exaggerating the value of a book read for review; to suggest the merely good is classic, the mundane a disaster. That is because we reviewers are mentally composing and editing while we read. We find highs and lows, allusions to other works, and interesting things to write about interesting writing. I certainly can’t speak for all of us, however every now and then some of us lose our objectivity, put aside our search for amusing summary, and just let the book wash. This is one of those. Insomniac City isn’t so much a book to read, it is a book to love.

Bill Hayes, a novelist, journalist and photographer brings all three of those skills equally and at their peak to this series of reminiscences. Some are presented as perfect short stories, although all are factual. There are short journal entries and also a series of black-and-white photos of random people, objects, places, and Hayes’ deceased lover Dr Oliver Sacks.

Oliver Sacks, the same one that Robin Williams played in the marvelous film Awakenings; the same one that wrote fourteen books published during his lifetime, mostly on his career as a neurologist. To say the very least, he was a brilliant doctor, well-known for the intense personal care he gave his patients. The latter may have well have been a result of Sacks himself carrying at least two physical afflictions throughout his life. He was both a migraine sufferer, albeit one who rather enjoyed the explosions of colour that emerge and radiate during an episode. In addition, both Sacks and his brother had prosopagnosia aka ‘face blindness.’ He could not remember for identification purposes someone else’s face; or for that matter, not even his own when he would see it reflected in a mirror or a window.

This next is sheer speculation on my part, but I do wonder if the prosopagnosia led to Sacks being celibate for decades, before Hayes came into his life in 2009. After all, a man such as he was, one that blessed the world with kindness and care could never be given to casual affairs. There would be much too high a probability of running into a past lover on a street or at a party and not knowing who they were.

In any event, the loving relationship Hayes had with Sacks constitutes roughly half of Insomniac City; the other half, explored just as lovingly, is the relationship Hayes establishes with the city of New York. With regards to the latter, as you may or may not know, I never read anyone else’s review of a book before I have written my own. (This is where you chime in with some shy complimentary comparison of steak v. hamburger and if you do I’ll love you forever.) However, I suspect that if fault was found with Bill Hayes’ book it is that his New York is presented completely one-sided, all for the good. By the time I reached the end I was seriously thinking, ‘I know people in New York. I suppose I could do one more Big Move in my life.’

If you do find that a reason for complaint though, well I have to say you’re a complete curmudgeon. After all, if you were describing someone you love to the world at large would you really pick them apart piece-by-piece, snore by phlegm-filled snore, just so some crummy reader who you’ll never meet in a hundred lifetimes will metaphorically pat you on the head because you’ve been properly ‘objective’? (If you would, here’s a Pro Tip: Please don’t take up writing as a profession unless your Spirit Animal is a hermit crab because you’re going to end up living alone in a hard shell.) Something I admire about Hayes’ book is that it is loving without ever becoming cloying or self-serving. Oh that would have been so very easy to do and absolutely no one would ever blame him for it. Sacks was in his late seventies by the time Hayes, about fifty, met him and the former was already blind in one eye from a 2006 treatment for an uveal melanoma. Although he kept up his swimming, Sacks did need a degree of care from imbalance even before the spread of cancer to his liver that caused his death in 2015. Yet Hayes never casts himself as – oh you can imagine it – ‘the heroic lover who bit his stiff upper lip and assisted The Great Man through his declining years.’ Not a word of that to be found, anywhere.

Instead of such schmaltz there are multitudes of telling details that shine like raindrops falling past a streetlight. They are little things, and great writing is formed of little things, pixel-sized, that form pictures of big things. Some of them are auditory: “How I could hear his feet shuffling on the carpet. And how I like that sound.” Others are visual:

Behind Oliver, through a large picture window facing north, Eighth Avenue unfurled as far as the eye could see. I have this thing where sometimes I try to catch the moment when all the traffic lights on Eighth align and turn red, their number multiplied countless times by the brake lights from stopped cars and taxicabs. It doesn’t happen often at all, traffic lights seeming to have their own sense of time, and Oliver never quite catches it. So I watch for the two of us. Finally: ‘There, there it is, see?

He turns to find a fiery red Milky Way on the streets of Manhattan.

And in a blink, the lights are turning green.”

The ones that hit the deepest are the philosophical moments, the ones that make a reader glad (as indeed Hayes must be glad himself) that the author was a compulsive keeper of a journal:

O: ‘How much can one enter, I wonder, another’s insides – see through their eyes, feel through their feelings? And, does one really want to …?”

After I kiss him for a long time, exploring his mouth and lips with my tongue, he has a look of utter surprise on his face, eyes still closed. ‘Is that what kissing is, or is that something you’ve invented?’”

Hayes brings his photographer’s eye and writer’s ear to every moment in this beautiful book. One starts to feel delighted when the author drops into the nearby news agent/head shop for his copy of The New Yorker as we can catch up with Ali, the shop owner. We share Hayes’ curiosity with the subway riders, the skater boys, and we enjoy the thrill of dropping into a surfer shop’s Christmas Party, uninvited, just because it’s fun and New York doesn’t seem to mind. And as for the photographs, the people all seem welcoming, perhaps because Hayes always asks for their permission before taking their picture.

This year of 2017 is still fairly young and I know I shall fill it with many fine reading experiences. So far though, this is the best. If you love, this is a book to love.