By  Ben Gelblum, Contributing Editor @BenGelblum The Siege by The Freedom Theatre is the largest tour ever mounted by a Palestinian theatre company in the UK. But according to the Mail on Sunday – the 10 city UK tour is “£15,000 of public money given to show based on the words of Hamas killers.” The Freedom […] 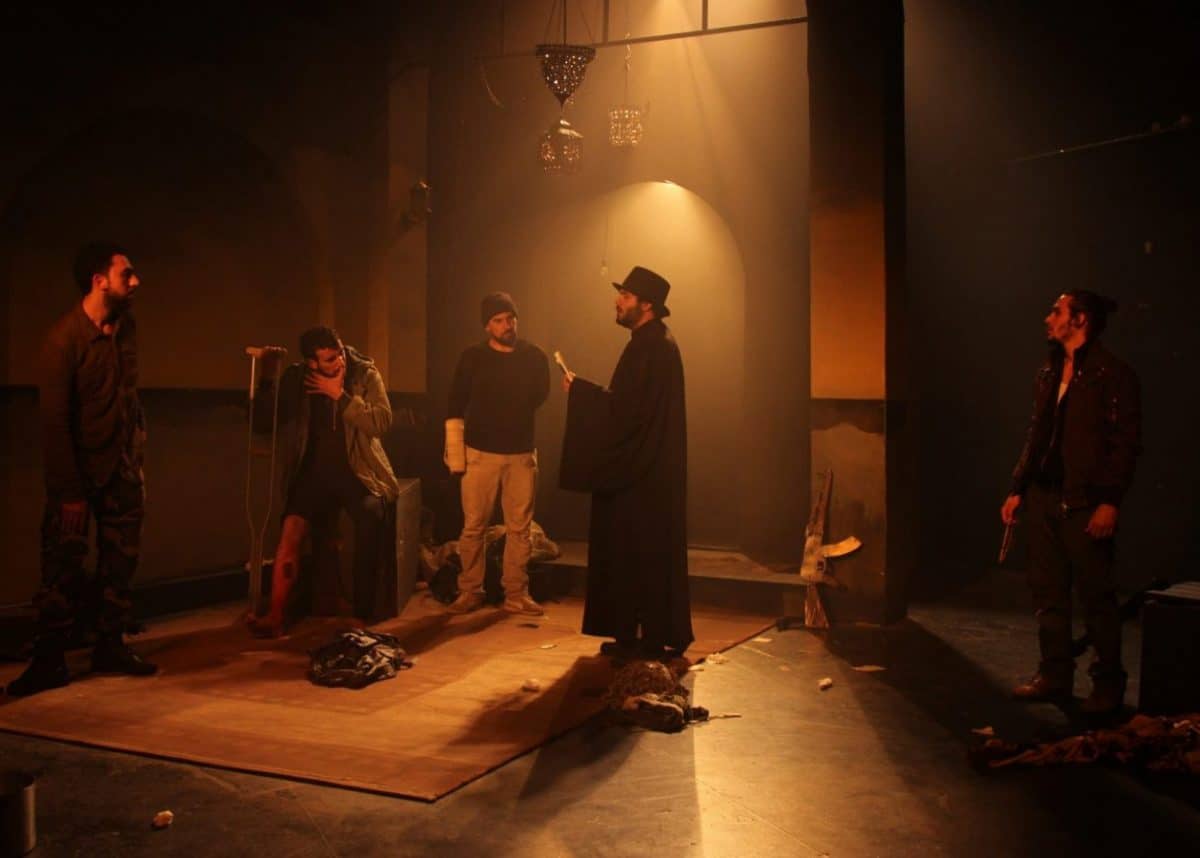 The Siege by The Freedom Theatre is the largest tour ever mounted by a Palestinian theatre company in the UK.

But according to the Mail on Sunday – the 10 city UK tour is “£15,000 of public money given to show based on the words of Hamas killers.”

The Freedom Theatre in Jenin refugee camp in Palestine has been an artistic hub of cultural resistance to occupation since it was established in 2006.

Obtaining visas, leaving the West Bank and travelling to the UK via Jordan was no mean feat for cast and crew.  And they have arrived to media controversy and protests organised by the Zionist Federation.

“UK taxpayers fund ‘pro-terrorist’ play” was the Mail on Sunday headline. –  In response playwrights including Caryl Churchill, Dominic Cooke and April de Angelis, as well as actors such as Mark Rylance, Maxine Peake and Samuel West expressed alarm that the Arts Council and British Council were being attacked for supporting the historic UK tour. Their letter to the paper warned: “Not for the first time, Palestinian voices are in danger of being drowned out by a vociferous pro-Israel lobby that smears all Palestinians as terrorists and antisemites.”

When it comes to the history of Palestine and Israel, competing narratives have divided the land as fiercely as guns, tanks and watchtowers. So I went along to the London leg of the tour with an open mind.

I’ll never forget visiting the Church of the Nativity in 1999. – Optimism ignited dusty Bethlehem. Hotels and restaurants prepared for the great influx of tourists to the Millennium’s ground zero – Jesus’ birthplace in occupied Palestine.

But just months later, in the wake of another failed peace process, the Second Intifada broke out, claiming around 3,000 Palestinian and 1,000 Israeli lives over six years. Protests spread across the West Bank and Gaza Strip; bullets, tanks and bulldozers ravaged Bethlehem.

The events portrayed in The Siege took place at the height of the uprising in the spring of 2002 when a group of fighters from different Palestinian factions sought sanctuary from the Israeli army in the church that marks the birthplace of Jesus, along with hundreds of priests, nuns and civilians.

The Siege is certainly dramatic. The tension of the 39 day siege that ensued at Bethlehem’s Church of the Nativity brought to life vividly by a cast who have only known occupation all their own lives, and portray an emotive episode from a history of occupation that they still live in every day.

The play is also a revealing piece of theatrical journalism. Palestinian director Nabil Al-Raee and British director Zoe Lafferty travelled across Europe to interview the 13 Palestinian fighters who were exiled after the siege as part of an internationally-brokered agreement. For them it is a story that still hasn’t ended as their exile continues 13 years on.

And this is what has caused uproar among sections of the Jewish community and press. The Israeli Foreign Ministry insists that the exiled men had blood on their hands. And the Zionist Federation have vowed to leaflet outside performances to “counter balance” the story of the play, singling out one of the leaders whose testimony informed the play. -Ibrahim Abayat, interviewed in this video for the production, is alleged to be behind acts of terror against civilians:

I asked The Siege’s creator Nabil Al-Raee about such allegations after last night’s performance at the Battersea Arts Centre, and he insisted that the play was not glorifying terrorism or “defending such acts in any way.” If crimes occurred people should face trial, he insisted, explaining: “to tell the story of the siege, we had to interview people who were there, – ordinary people who still live there today, as well as the fighters who live in exile.”

British director Zoe Lafferty added: “I was accosted by a Mail journalist with all kinds of accusations, so I said ‘surely before you make these accusations you need to come and see the play,’ but he said he couldn’t because of his deadline!”

This telling of a siege played out in front of the world’s TV cameras from the inside of the holy site surrounded by Israeli tanks, helicopters and snipers is a fascinating piece of theatre.

An insight into the dilemmas the Palestinian fighters faced – holed up with their dead and injured comrades, civilians and priests, their whole town under curfew in an Israeli act of collective punishment – be anything but partisan?

The issue of who controls the narrative plays out throughout The Siege. “We are dealing with an Israeli propaganda machine that speaks every language,” laments an injured fighter towards the end of the play as it becomes clear those holed up in the church are being blamed for the suffering of the 70,000 inhabitants of Bethlehem held captive by the Israeli army restricting movement in and out of the city until they surrender. “It makes the oppressed into oppressors,” he howls.

And this fascinating story, just one of endless stories of sieges, exiles, conflicts and suffering from the occupation of Palestine becomes emblematic for the permanent siege of life under occupation.

In just over one hour of taught theatre, holed up with food and water running out as snipers pick them off, the tense standoff causes the cast to confront many of the big questions of how to respond to occupation. –

When to fight and when has everyone suffered enough? What are they fighting for – land or the chance to “live a normal life like everybody else”?

Should they take responsibility for the actions they commit in this fight? Should their leadership, the “international community”, or the occupiers? “Without the occupation we would not be here,” says one of the fighters.

At times the characters’ reality gets lost in polemic, but this is a brutal glimpse into life under siege in occupied Palestine in a situation that has only become more brutal and intractable.

How do we solve the situation? “The solution is simple,” smiled Nabil Al-Raee after last night’s performance. “Give everybody their human rights and there is enough room for everybody in this land.” But, he added there is untold suffering to apologise for and much forgiveness to be found.

If there is any chance of that ever happening, such stories must be told and definitely listened to.  And if theatre can’t put you in someone else’s shoes for an hour and tell their story, then what is it for?

For more on The Freedom Theatre of Jenin and their current tour of the UK with The Siege :