by Ollie McAninch
in Books, Promoted 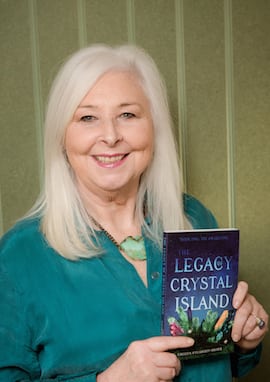 Not Just Another Self Help Book – The Legacy of Crystal Island

An experienced therapist has combined people’s love of fantasy fiction novels with a real desire for self-understanding and improvement in a bid to write anything but another self-help book.

The Legacy of Crystal Island is the first in a trilogy of books by author and renowned therapist Colleen O’ Flaherty-Hilder which will explore the human mind and the way we can be conditioned into what we think and feel – through the genre of a novel.

Set in the 22nd century, The Legacy of Crystal Island follows the seven-year initiation of Orla, a fourteen-year-old princess who lives on an enchanted island protected by a crystal fortress. It is set in a world that is rapidly degenerating under the rule of leaders focused on greed and the perpetuation of fear.

Orla is a direct human-crystal descendent of the Crystalanders, the Guardians of Eternal Wisdom, who are responsible for keeping balance in the whole cosmos.

In the early days of man’s story, they bestowed Gifts of Creation on the Earth, transforming man’s inherent primal fear with Crystaland Wisdom. After many thousands of years, the primal fear programming resurfaces and once again becomes dominant in man leading to Earth’s spiral of degeneration.

Orla’s destiny is to re-awaken Crystaland Wisdom in man’s cellular memory and transform the hatred and conflict in the hearts and minds of mankind.

To equip her with the necessary tools and knowledge, she has to undergo an immersion into the unique qualities of Wisdom held in the seven worlds of Crystaland and fully experience the original Gifts of Creation given to Earth.

Colleen, who is a practicing Oligotherapist and aromatherapist, with offices in Liverpool Street London and Sonning Common, South Oxfordshire said: “Although set in the 22nd century this it not a dystopian story, but rather one of hope. It can be enjoyed as a story but also has a lot to tell us about ourselves.

“The books deal with our emotional programming which holds the archetypes that determine how we respond to the world and everything in it.  Emotional programming cannot be easily defined or explained within the parameters of reason or logic and that is why I chose to write a fantasy.”

Based on her 35 year’s experience of guiding people through emotional transformation, Colleen believes how we respond to the world depends on our emotional memory (Emotional Intelligence).  What has formed our archetypes is stored in our emotional memory. This is a primitive response but is important to our survival and is inherited by each generation.

There are also differences between the sexes and the way they are programmed, their qualities and limitations, which are important for both.

The story looks at many key issues:

This first book explores how humans have got to this point. Subsequent books in the trilogy will explore what needs to change and how we can learn to respect everything within our environment for better outcomes for us all.

Colleen added: “One of the key aspects of the book is also to remind us that humans are only caretakers of a beautiful planet. Our priorities should be to protect it and care for the community rather than focusing on the desires of the individual.”