Where Can I Find It?: Netflix (UK), NBC (USA) When Is It On?: New episodes uploaded on Netflix weekly; Thursdays at 8:30PM (NBC) Who Stars?: Ted Danson, Kristen Bell Of all the sitcoms that have ever been presented on television, The Good Place has the biggest, juiciest, best of all plot swerves. This creates a wee bit of a problem […] 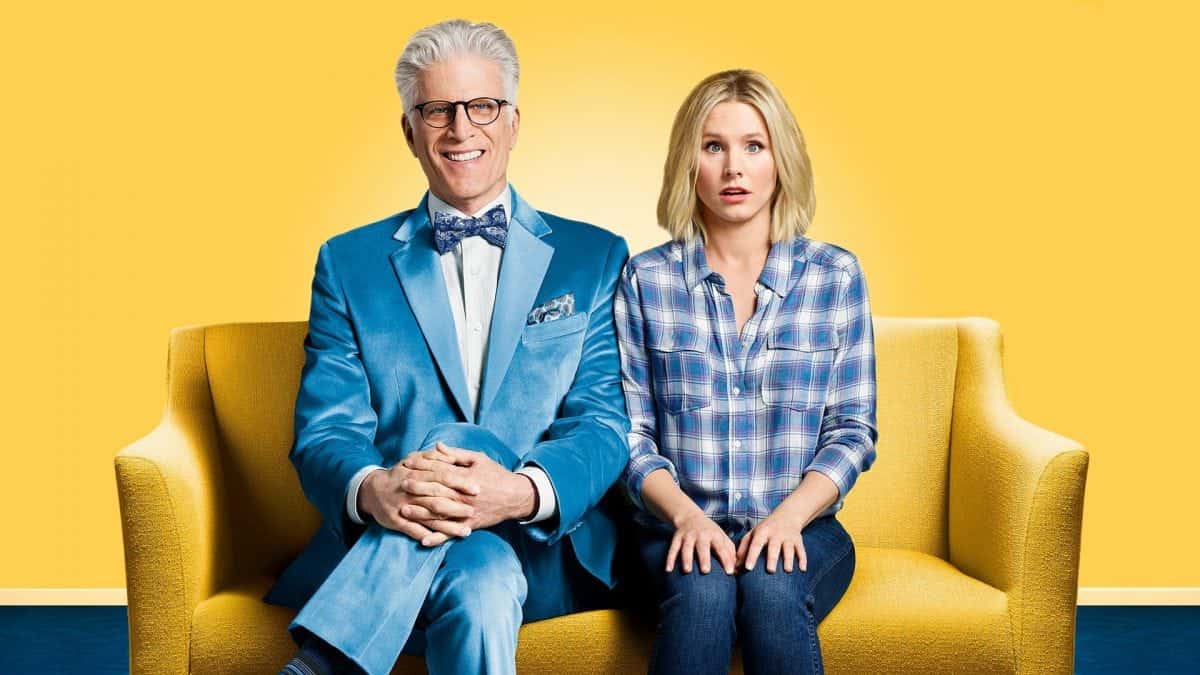 When Is It On?: New episodes uploaded on Netflix weekly; Thursdays at 8:30PM (NBC)

Of all the sitcoms that have ever been presented on television, The Good Place has the biggest, juiciest, best of all plot swerves. This creates a wee bit of a problem in reviewing it. Because this is a recommended Binge Watch we’ll be looking at the entire story arc of the show which is now in its second season. However, so as not to ruin the swerve for new viewers, if you do not want to know what happens then or beyond when you see the photo of Alex Kingston as River Song saying ‘Spoilers!’ stop there! Do we understand the rules? Good. Then let us proceed.

It has been suggested by philosophers, psychologists and all-around pessimists alike that the great flaw of our lives is that we spend so much of it worrying about what happens after it ends. Does consciousness continue in some form or another, or is this all there is? That question has birthed every religion, fueled some of the better academic debates, and modifies our very behaviour as it is suggested that an after-life might just be dependent on what we do in this life.

Now, I’m here to judge television and not belief systems so let’s leave that larger issue aside and just go with the flow. For entertainment purposes let’s say there is something beyond the grave and if there is, what would you like it to look like? That is the concept at the core of The Good Place.

To its credit, The Good Place never refers to the after-life as Heaven, Hell, Nirvana or any of those other culturally loaded words. Instead, dependent on how good, bad or indifferently one has been on Earth then one is assigned eternity in The Good Place, The Bad Place or The Medium Place (population: one). Similarly, the male lead Michael (played by Ted Danson) is not presented as God or an Archangel or some kind of Saint Whomever; rather he is an architect who has designed a neighbourhood of 300 where all needs will be met, a true soulmate will be assigned, and there are lots and lots of frozen yoghurt stands. Who could ask for anything more?

Well, Eleanor Shellstrop (Kristen Bell) knows there is something wrong because the house she is given does not suit her tastes and neither does her soulmate, a recently deceased Professor of Ethics named Chidi (William Jackson Harper). Deep down inside, Eleanor knows that she does not deserve to be in The Good Place because on earth she was a habitual liar, lazy, and her job was selling quack medicine to gullible seniors. Complications arise.

For most of the first season – at the time of writing The Good Place is three episodes into its second series – the show concerns itself with the comedy predicaments of Eleanor fitting in even though her behaviour in The Good Place causes cataclysmic results up to and including an invasion by flying shrimp or a sinkhole appearing in the ground. Michael is exasperated, Chidi tries to teach Eleanor how to be ‘good’ and it’s all laffs and fun. If this was all The Good Place was, that would be good enough, although I did find myself thinking that the show would run out of gas before long as how many variations can there be on flying shrimp? Even The Prisoner with its equally surreal Village only sustained itself for one series. But, that is not my problem, nor should it be yours. Do watch until the very end of the first series though because …

… because the showrunner/head writer Michael Schur (The Office in its US incarnation, and Parks and Recreation) also knew that an entire series purely based on bumbling about in an ersatz Heaven was not quite interesting enough. Instead, it turns out that The Good Place is, in fact, The Bad Place. Michael has invented an experimental hell of mental torture with four deceased souls (the aforementioned Eleanor and Chidi, along with Jameela Jamil’s philanthropist Tahani, and the dumb as a bag of rocks Jason played by Manny Jacinto) as the guinea pigs. Now we’re getting somewhere!

Actually, we’re getting somewhere and beyond for the torture only works if the tortured doesn’t realize s/he is being tortured. In other words, if you know that everything I tell you is a lie, you’ll just ignore me and carry on with your day. Thus, Michael must erase the memories from the four guinea pigs and start all over; yet they keep coming to the correct conclusion that The Good Place is not The Good Place.

The Good Place begs for re-watching after you know the swerve. Just like a perfectly crafted mystery novel, all the clues are there. Suddenly, Michael’s big smile really looks rather like a grimace, now doesn’t it? And who really prefers frozen yoghurt to ice cream?

I am completely expecting that The Good Place will have even more swerves ahead. My best guess right now is that The Good Place really is The Good Place and the four lost souls are being tested to prove their worth. But who knows? In any event each episode is packed with jokes delivered with exquisite timing and an intelligence that far surpasses 99% of what passes as comedy in the sitcom genre. Load up on the popcorn and enjoy!