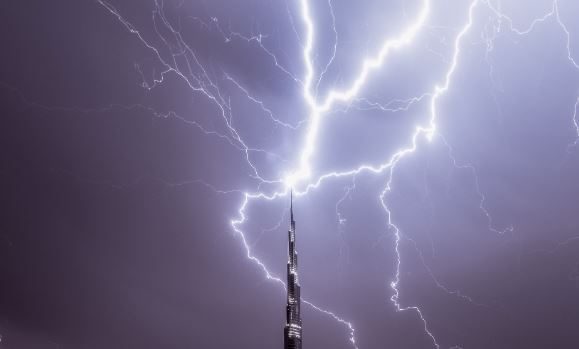 This is the moment a lightning bolt struck the tallest building in the world during a violent thunderstorm in Dubai.

The professional photographer was “lucky enough” to capture the powerful lightning bolt striking the highest point of the huge skyscraper.

Teemu, originally from Finland, said: “I’m happy and lucky enough to be at the right place at the right time, it’s the most rewarding feeling in this type of photography.

“There were many wasted days as well with lots of planning and waiting but no results, so when it does work out it feels great.”

Teemu, who spent seven hours capturing these images, says he stands on balconies and rooftops of buildings in downtown Dubai to get the perfect shot.

He added: “For storms, it’s balconies due to safety reasons but for other shoots it can also be rooftops.

“I don’t really get scared, I haven’t noticed the altitude making any difference to my fear in taking the picture, it is more about how close the storm is.

“I usually stay there for the full duration of the storm.”

Teemu says he gets his inspiration from films including Blade Runner.

The Burj Khalifa, which is Arabic for Khalifa Tower, became the tallest building in the world when its construction was finished in late 2008.